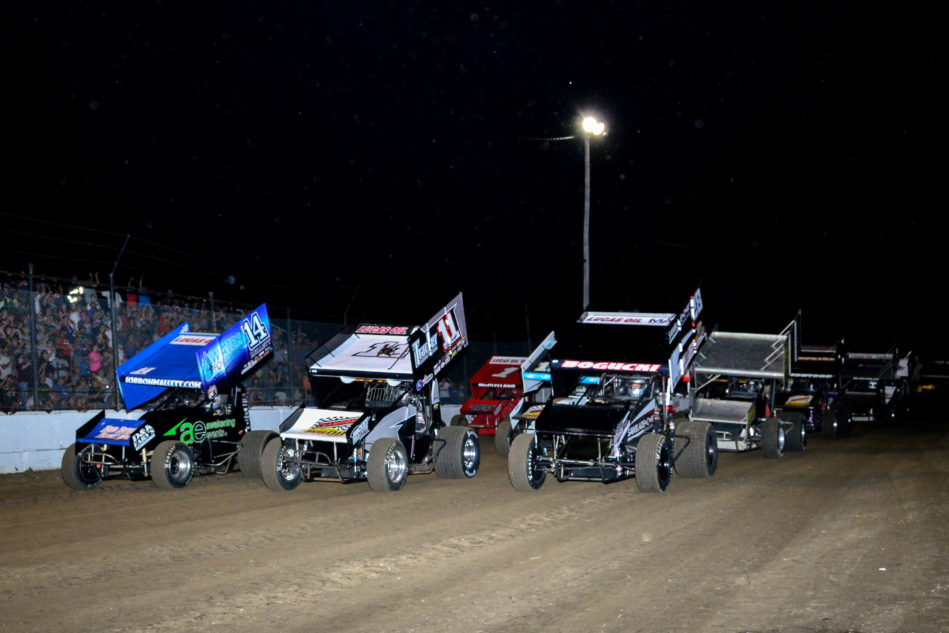 We are less than 2 weeks away from the first ever running of the $70,000, Lake Ozark Speedway Memorial Weekend Sprint & Midget Nationals.

The race should be a nice blend of Lucas Oil ASCS National Tour stars like Blake Hahn, Matt Covington and Seth Bergman, local stars; Evan Martin and Garet Williamson and Ayrton Gennetten in addition to tough invaders like Derek Hagar and Roger Crockett.

Here is a look at some of the top drivers who will be vying for the $10,000 to win, Sunday night, sprint car prize and some people to watch out for.

Nixa, Missouri’s Kyle Bellm is one of many locals who has a good chance to defend his home turf against the outside invaders. Bellm is a former Lucas Oil ASCS National Tour competitor and has scored 2 career National Tour feature wins in addition to capturing the 2015 Rookie of the Year Award. In addition to his 2 National Tour wins, Kyle has had a lot of success with his local Warrior Region where he has racked up 6 career feature wins. Kyle has always run strong at Lake Ozark and currently sits 7th in The ASCS Warrior Region points standings.

The exciting Australian has spent the last few years competing full-time on The Lucas Oil ASCS National Tour and is one of the favorites to win on Memorial Weekend. Bogucki has picked up National Tour feature wins at Devil’s Bowl and Texas Motor Speedway and currently sits 6th in Lucas Oil ASCS National Tour points after misfortune in back to back weeks. Bogucki is one of the hardest driving 360 drivers in the nation and his driving style has not only made him a fan favorite, but will also suit him on Lake Ozark Speedway’s high banks.

Jeremy Campbell is a long-time, well travelled, veteran of the sport. Campbell’s sprint car roots began in Michigan before he began travelling the country and eventually competing with The World of Outlaws full time. Jeremy has focused more on 360 racing in the last few years and has been arguably the toughest car in the Kansas area over the last few seasons. Last year saw Campbell switch his focus to The ASCS Sooner Region where he suffered a heartbreaking title loss after misfortune in the final race of the season at Creek County.

Jonathan Cornell is one of the most underrated 360 driver’s in the nation and will certainly be a favorite to defend his home state against all comers should he choose to compete. Over the past few years Jonathan has dialed back his racing but whenever his potent #28 has shown up at the track, Cornell has been a contender. Jonathan currently sits 3rd on the all time Warrior Region wins list with 42 career victories and it would surprise no one if he found success at Lake Ozark Speedway on Memorial Weekend.

A long-time Lucas Oil ASCS National Tour competitor; Matt Covington finally seems to be putting it all together as he chases his first career National Tour title. Covington comes into Memorial Day having his strongest season to date having won with The National Tour recently at I-96 in Michigan. Matt was fast earlier this year at Lake Ozark Speedway and typically runs well on high banked race tracks. If Covington maintains his early season speed he is certainly one of the favorites to pick up the $10,000 winning paycheck on Sunday.

Roger Crockett has won races all over the country with several different organizations and comes into this season running a true, “Outlaw” style schedule. The decision to pick and choose his races seems to be paying off as Crockett recently won and finished 2nd during Sooner Region competition at Longdale. Crockett finished 2nd in National Tour points last year and is one of the favorites among drivers who will be invading Lake Ozark Speedway having run particularly strong at the facility in recent years.

Ayrton has been one of the fastest rising stars in the Missouri racing scene. A 3rd generation racer; Gennetten made the jump to 410 competition last year and started to make a name for himself nationally. In addition to his 410 success, Gennetten has qualified for the 2 most recent Knoxville 360 Nationals and has established himself as one of the top Missouri sprint car racers. It’s not known for sure if Ayrton will compete at The Memorial Day Sprint & Midget Nationals but if he shows up he will certainly be one of the most likely local racers to capture the $10,000 first prize.

Hahn has been on fire to start the 2021 season. Coming off a disappointing 2020 season that saw him never really in title contention, Hahn and his team worked hard in the off season and have been impressive this season to say the least. Blake currently leads The Lucas Oil ASCS National Tour standings on the strength of 2 wins coming at Park Jefferson and Volunteer Speedway. Hahn has yet to finish outside of the top 10 in National Tour competition and was in contention to win both Warrior/Sooner Region races held earlier this year at Lake Ozark Speedway.

One of the invaders who could pocket the $10,000 is Derek Hagar. Hagar was the winner of the last major 360 race run at Lake Ozark Speedway, having captured $5,000 on Labor Day Weekend last year. Derek has established himself as one of the top short track racers in all of 360 racing and has already won Missouri’s other crown jewel 360 race; The Jesse Hockett and Daniel McMillin Memorial with and without a wing. Hagar is especially potent on the type of surface that Lake Ozark typically offers and will certainly be one to watch on Memorial Weekend.

The story of JJ Hickle and the Jane and Ivan Worden racing team has been like a storybook so far. The California-based team has decided to travel the country for their last season of sprint car racing and have set their sights on a Lucas Oil ASCS National Tour title. Hickle served notice that he will be amongst the favorites to win the title this year by sweeping the season opening weekend at Devil’s Bowl. JJ and the team ran The Warrior/Sooner region shows at Lake Ozark Speedway and adapted to the track quite nicely in picking up a 4th place finish in the finale.

Evan Martin will be one of the top locals looking to defend their home turf on Memorial Day Weekend. Martin, driving the potent Heidbreder Foundation Service sprint car, is the defending Lake Ozark Speedway track champion after defeating Miles Paulus by a slim, 2 point margin. In addition to last year’s track title, Evan has already earned 2 Warrior Region feature wins and his always gorgeous #4 will certainly have speed on Memorial Weekend.

Another local with a shot to run up front will be Gunner Ramey. Ramey is relatively new to the area sprint car racing scene but is in very good equipment driving the Terry Doogs Racing #21. Ramey has been racing as much as possible not just in Missouri but also at the famed Knoxville Raceway where he recently picked up his first top 10 finish.

Despite never focusing on 360 racing specifically, Tyler Thomas has become one of the top sprint car pilots in Oklahoma. In addition to competing in a winged sprint car, Thomas is also a standout in midget racing and is one of the drivers who may pull double duty at The Memorial Weekend Sprint & Midget Nationals. Thomas has already turned in dazzling performances at major 360 races including making A Main starts in both The Knoxville 360 Nationals as well as The Short Track Nationals where he locked himself into the feature as a rookie. Thomas has already found victory lane at Creek County this year and is having a nice season for himself so far this year

Thornhill comes into Memorial Day weekend as one of the youngest full-time competitors in Lucas Oil ASCS National Tour history. The Washington state racer has run well on The National Tour so far this year having already earned his first National Tour top 10 finish and he currently sits 7th in the tour standings. Thornhill raced at Lake Ozark earlier this year where he started up front but flipped early in the feature.

One of the most watched, young racers in recent memory is Ryan Timms. The Oklahoma teenager has long been looked at as a potential racing phenom having had a ton of success running mini sprints in Oklahoma. So far in his short sprint car career Timms has lived up to the hype having scored a decisive win at Lake Ozark earlier this year in a Warrior/Sooner Region showdown before nearly sweeping the weekend and ultimately running 3rd the following evening. Timms has 2 wins already this season and looks to be one of the clear favorites to cash the $10,000 winners check following his performance at Lake Ozark earlier this year.

Westbrook has yet to break through for his first Lucas Oil ASCS National Tour feature win but he did capture a Warrior/Sooner Region race win at Lake Ozark Speedway this spring. In addition to his Lake Ozark triumph, The Canadian also took home $5000 scores at I-30 Speedway and 34 Raceway last year. Dylan has been fast this year but has run into issues that have him lower in National Tour points than he’d like, but given his speed he will certainly be one of the contenders at Lake Ozark on Memorial Day.

Williamson was a National Tour regular last year but has switched to an open schedule in 2021. Garet showed a ton of speed and had some success on The National Tour as a rookie but never quite was able to break through for a feature win. The 2021 season has been a disaster so far for Williamson who has already endured some vicious crashes but there is no denying Garet’s speed both in general but specifically at Lake Ozark Speedway where he’s already been very fast throughout his career.

The Sprint portion of the Memorial Weekend Nationals appears to be shaping up as a great showdown between the Locals vs. Outsiders and youth vs experience. Don’t miss it!