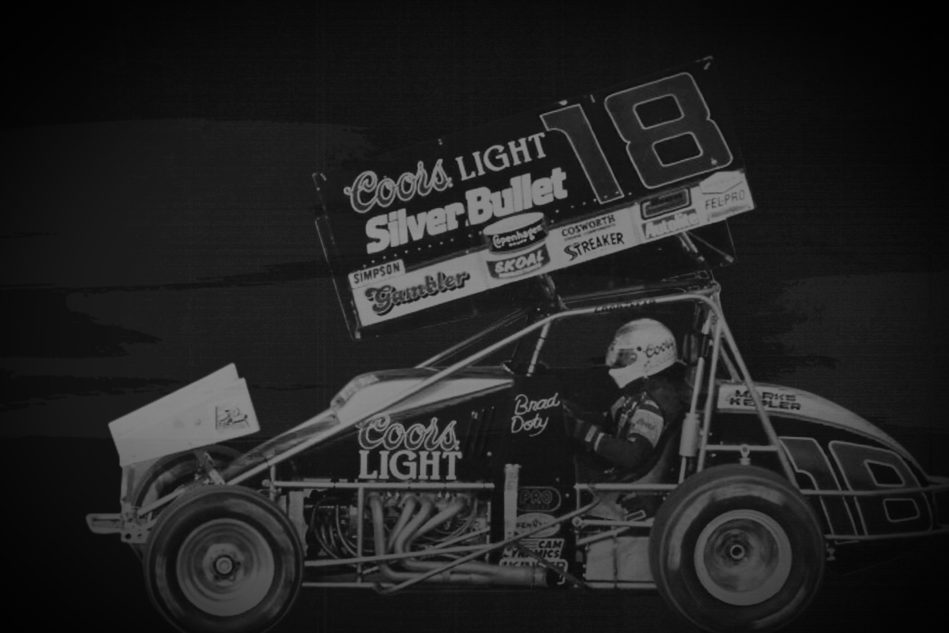 Brad Doty has done it all – period. He raced against the best sprint car drivers of his time and won – often. Along with Dave Argabright he wrote one of the greatest auto racing books ever – probably the best sprint car biography we will ever get to read. One of the things that made Still Wide Open great was his openness and honesty.

He is a race promoter, putting on an annual event that every sprint car racer desperately wants to win. Not because of the purse, but rather who the race is named for – Brad Doty. He once drove a few of the slowest laps he had ever made at Eldora that caused a lot of hardened, old eyes to leak oceans. He brought a ton of insight to televised race coverage at a time when it was needed. He’s written extensively in magazines for many years. Yes, Brad Doty has done it all.

The best part for all of this is that Brad stayed in love with a sport that hurt him so badly. He’s given his all to sprint car racing and for that we owe him a debt that no one can repay. He also has built one very cool red pick-up truck. Best of all, he took the time to answer our questions.

TDP: First of all, how is your family? There were recent health issues with your son – how are things now?

BD: Our family has been good thankfully, and no one so far,  in our immediately family has gotten COVID. Our son; Braden was healing and getting full mobility back in his hand after his brain surgery, it was his second in 10 years, but about 8 months later he had another bleed in a different spot on the brain which caused a seizure. He is on medication and things are going ok for now.

TDP: Sprint car safety has indeed improved in the last few years mainly due to improved seats and head and neck restraints, but also tubing thickness rules and you were in the no weight rule era. The question is – If your accident happened today would the results still have been the same?

BD: I don’t really know if my accident happened today if the outcome would be the same or not. Although the back of my car, the rear torsion tubes, part of the roll cage and seat mounts were ripped out of the car, I don’t know that under the same impact if today’s car would hold up any better or not. As far as the new and better seats, they are undoubtedly a lot safer but it looked like my seat was ripped backwards and the rear end hit the back of the seat and so today’s seat probably wouldn’t have helped in my case.

TDP: We all know you are a proponent of larger fuel tanks – if you would, can you give us a short list of reasons why you are for them and then please give us the single best reason you’ve heard for maintaining the status quo?

BD: I’m not necessarily a proponent of larger fuel tanks; I just think its crazy having to stop a 30 lap sprint car race to add fuel. At one time it was happening so often that I think people started to feel it was “just part of the sport”! There has been a concerted effort to run more efficient races and do things that have helped, and fuel stops have become less of an issue in recent years, but I still think more can be done. I’ll just leave it at that.

TDP: In the late 90’s we had a lot of well funded sprint car teams with nationally known household names for sponsors, TNN coverage, and SMI building state of the art tracks, Texas, Vegas etc. First of all is that hindsight and rose colored glasses or were things really that good? Please compare where we are at today vs. then.

BD: In the 1990’s and into the 2000’sprint car racing had a lot of live TV coverage and it did seem that more teams had corporate sponsors then but I can’t say for certain that it was because of the live TV coverage. But, the sport was getting a lot of attention and state of the art dirt tracks were being built and it looked like, for good or bad, that sprint car racing was gaining ground with “mainstream media”. When LIVE tv went away some peoples eyes some of the excitement went away as well. Now with LIVE internet streaming, especially last year when ALL other sports, including most other racing series were shut down due to COVID, sprint car racing was the first to run a live event.  A lot of people were stuck at home and many of them tuned into to watch, and some watched sprint car racing for the first time ever! It seems momentum and the popularity of the sport is growing again.

TDP: Dirtvision and Flo Racing seem to be changing the sport in a positive way – is it going to stay positive – is it an illusion? By that I mean that they have the more hardcore fans as subscribers – will they be able to attract new fans? If they are making money doing this, do you see the money filtering down to the tracks and eventually to the teams?

BD: As far as if internet streaming is good for the sport overall? It depends on many variables. Not all steaming services share the revenue they make off the broadcast with the track and or the promoters. So in that case it can be bad for the promoter because if weather is an issue and people opt to stay home and watch it on the internet, the promoter loses ticket buyers and gains nothing in return! Although I do think that streaming subscribers tend to already be sprint car fans whereas a TV broadcast is more apt to be seen by casual fans and hopefully make them diehard fans. As I stated above, the internet broadcasts were a huge boost to the sport last year when people were stuck at home. Maybe some of those fans saw an event online and now they will make an effort, when things get back to normal, to get out of the house and go buy a ticket to see that event live.

TDP: If Brad Doty was made the boss of all things sprint car – what changes would he make?

BD: That’s easy…I wouldn’t change anything because I would never want to be the boss!

TDP: Two questions about “Still Wide Open”. Are copies still available- if so where? – I know the first printing sold out rather quickly AND You were very honest about some of the crew chiefs you worked with and how you felt they treated you. Did you ever get positive closure with these mechanics?

BD: My book “Still Wide Open” has recently been reprinted, but only 500 copies were printed, and can be ordered at daveargabright.com or at the National Sprint Car Hall of Fame at sprintcarstuff.com. In my book I talk about a couple of crew chief’s who, let’s just say, we didn’t see eye to eye and things got a little heated at times. One of them I have talked to since the book came out back in 1999 and we both acknowledge we could have handled things a lot better, the other one, I haven’t spoken too since the book came out.

TDP: We are all sick of hearing about Covid – on the other hand has the pandemic taught the sport some positive lessons that we would have otherwise never have learned?

BD: I think COVID has taught us to not to take racing, or many things and anyone, for granted because there are no guarantee’s they will always be here.

TDP: Tell us about the biggest lessons you have learned about the sport from working at the promoter end?

BD: The biggest thing I’ve learned as a promoter is that you don’t just open the gates and count the money at the end of the night! LOL! It takes far more work and time then I ever imagined and the worst part is that all your time and work can literally be flushed right down the drain if it rains the event out.

TDP: Speaking of promoting – Every year, The Kings Royal plans inevitably leave the Brad Doty Classic with no wiggle room in terms of weather. This must be incredibly frustrating, I’m sure you have explored other dates etc. can we expect to see changes down the road re the date or is this still your best option?

BD: For years we had a rain date for the Brad Doty Classic, which was the following day, but lost it a when Eldora Speedway went to 4 nights for their Kings Royal event. It is obviously not the ideal situation for us but we understand that the Kings Royal is a much higher paying event and takes precedence over our show.

We could move our race to another date but it would most likely have to be on a weekend to fit the World of Outlaws schedule and there is still a chance we wouldn’t have a rain date because the weekend dates are filled. I also like a weeknight date because there is a better chance of getting more cars because most teams race at their home tracks on Friday and Saturday nights and we also might draw some of the NASCAR /sprint car drivers because they can’t run a sprint car on the weekends.

TDP: We all think sprint car racing is the be all and end all. Why isn’t it more popular with the general public?

BD: I think a couple things that makes sprint car racing, and dirt racing in general, not more popular is that no matter how hard we try to keep dust down, it is a dirt track after all, and it can get dirty. It’s hard for “casual” fans to want to spend their hard earned money and then have to sit and get covered in dirt. The other thing about dirt racing is, it has to be done at night because as hard as it is to keep dust under control at night it’s impossible during daytime racing when the sun is beating down on the track.

So between the dust and racing at night, when the show can sometimes run into the late night hours, it can sometimes deter families with kids to want to come to watch a race. We all need to work harder at controlling the dust and maybe more importantly, making sure we get the show done early.

TDP: It must give you mixed emotions seeing Jac Haudenschild retire – your story in Still Wide Open of him ‘punching’ Sammy remains a classic. Please share your emotions as you see Jac begin his final year.

BD: With Jac Haudenschild retiring at the end of 2021 it really makes me think back to when he, his brother Ed, and Kenny Jacobs and I all started racing together when we were just teenagers.

We pushed each other to be better and were fortunate to get to race all over the country and win a few races. We certainly had some good times, on and off the race track!