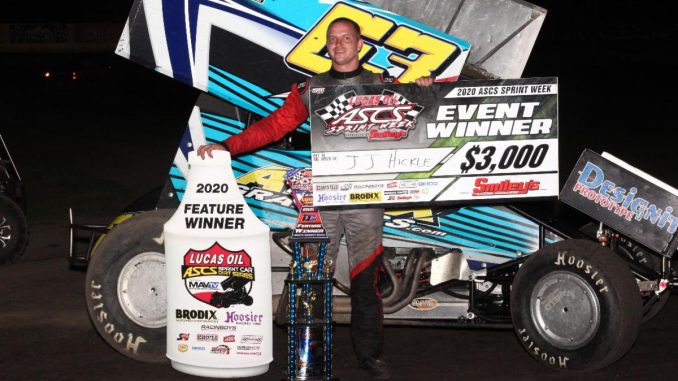 One of the neatest stories in sprint car racing has been that of JJ Hickle and his Jane and Ivan Worden owned #63 sprint car. The Worden’s decided during the offseason to do one final season of racing and decided they wanted to see more of the country so they chose to follow The Lucas Oil ASCS National Tour.

Hickle blasted into the series points lead over traditional title contenders like Seth Bergman, Blake Hahn and Matt Covington by sweeping the series opening weekend at Devil’s Bowl and looks to be carrying his momentum into the first crown jewel event of the season; The Memorial Day Weekend Sprint Car & Midget Nationals at Lake Ozark Speedway.

The Memorial Day Sprint Car and Midget Nationals will be Lucas Oil ASCS National Tour and POWRi National Midgets. The race boasts a purse of $70,000, culminating in the $10,000 win ASCS feature on Sunday. Hickle has every intention of riding his early season momentum to the top prize.

“We made it a point to come to Lake Ozark Speedway earlier this year because we wanted laps at the track before The Memorial Day show to get us dialed in,” explained Hickle. “We struggled a bit on the opening night and nearly missed the show but we were the hard charger in the feature. The following night we ran 4th.”

Hickle, along with the rest of The ASCS National Tour regulars will face stout competition from regional drivers such as Ryan Timms who won earlier this year and Mark Smith, who has been one of the top feature winners across the nation over the last several years.