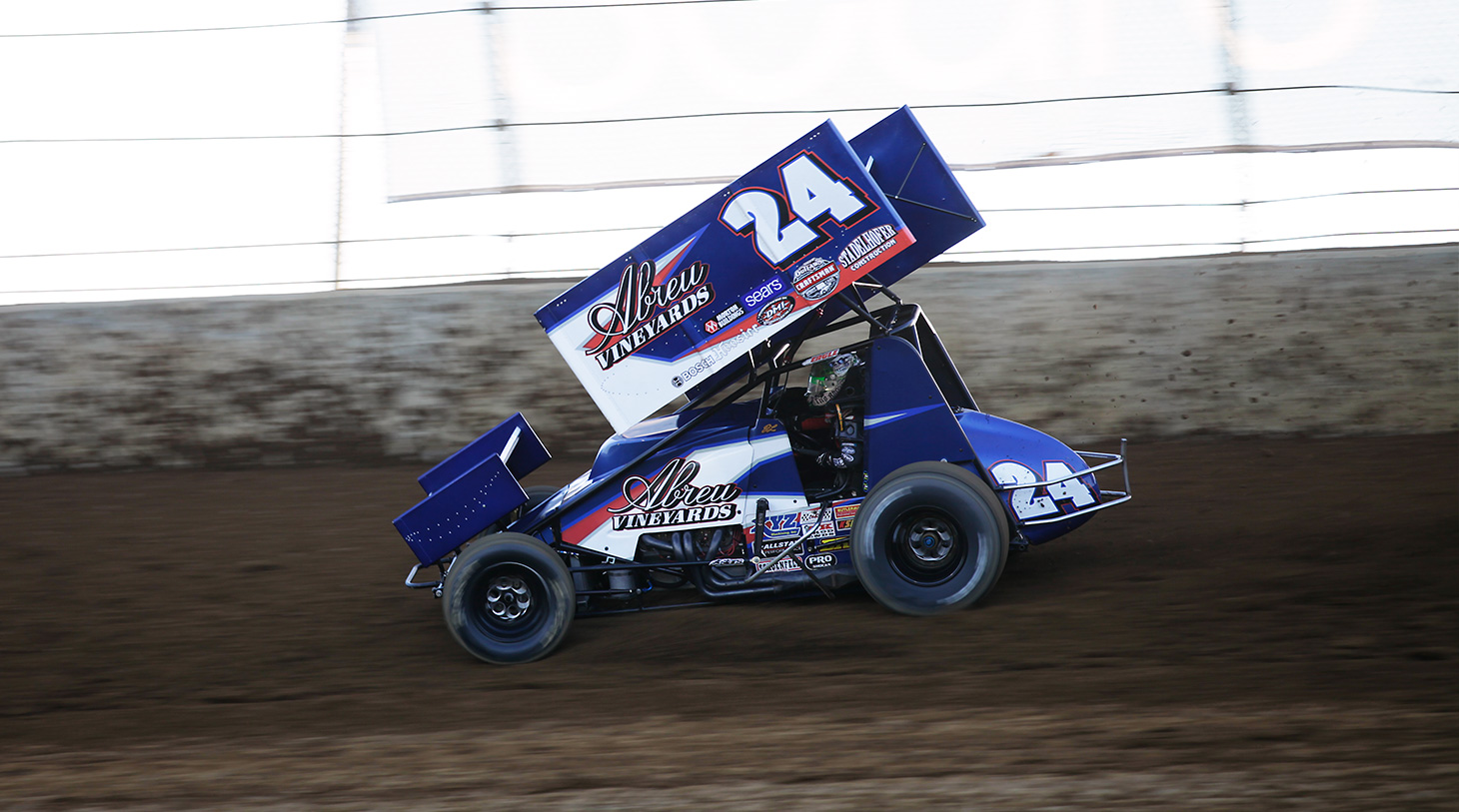 March 15th, 2014 will always be a date that sticks out in my mind as it was the date when I scored my first World of Outlaws (WoO) feature win at Thunderbowl Speedway in Tulare, California.

It was the second night of a 2 day show. I believe we ran 10th or so and the track had been really wet the night before so it was really tough to pass so everyone just hammered the bottom.

I always eat Applebee’s because whenever we race at Tulare and I’ve eaten there that day we always have a lot of success.

I believe we stayed at The Holliday Inn and worked all day getting our car ready and then ate at Applebee’s. I always eat Applebee’s because whenever we race at Tulare and I’ve eaten there that day we always have a lot of success.

A large part of the reason for my success is my team. I’m fortunate to have two really good people behind me in Paul Silva and Trevor Canales.

Honestly, until we hired Paul I’d never really been told “No”

Paul and I have a really good relationship. He wants to win so badly and I understand that. Paul works so hard at everything he does and he feels that I should work just as hard. His effort has helped push me towards a lot of the success that I’ve had. I’m never allowed to quit on the race track when I drive for him because you’re going to get your ass ripped if you do. Paul doesn’t really tolerate mistakes. He feels his cars are good enough every time they hit the track and he understands that sometimes we’re off but he’s really good about making sure I have a good, balanced race car. We work well together and we’ve won a lot of races and his cars are always fast no matter who drives them.

As you can maybe tell Paul can be kind of hard on his driver’s and that is really good for me because I’ve never had that in my life. Honestly, until we hired Paul I’d never really been told “No” by anybody about anything and it kind of opened my eyes to the real world. I’ve come from a background where I’ve lived on a farm and have never really had to get a job and Paul is someone who’s worked for every penny he’s ever made and works really hard at what he does and takes a lot of pride in what he does. He’s taught me a lot. He’s taught me to not be that spoiled brat or kid that’s had everything handed to him so it’s cool to have him in my life and give me a reality check sometimes.

A lot of people know about Paul but Trevor is like my best friend outside of racing. He’s a great buddy. He started working for Paul a few races before I came there when Paul was kinda racing his #57 car on and off.  Trevor now does everything for Paul. Paul’s never really trusted anyone as much as he trusts Trevor so it obviously shows that Trevor’s done a great job and doesn’t make too many mistakes. I always bug Paul that Trevor’s going to be better than him one day just because he’s learned from the best.

Following lunch Paul, Trevor and I headed to the track and felt pretty good about our chances.

Time trials are always critical at a WoO show and I believe I qualified 4th that night. I knew from the night before that my car was good, I just needed to qualify good.

Qualifying is pretty sketchy at Tulare just because the show is always in March, the track is always really wet there, it comes apart really easy and it usually develops a big hole going into turn 1. I think Steve Kinser crashed right before I was supposed to go out because he hit the hole. I knew if you hit the hole right and didn’t get all bent out of balance that you can turn a really quick lap. My first lap was okay, I think I was 10th or 11th quick. On my second lap I clicked off 4th quick. The only change I really made on the second lap was that I just drove a little bit harder through 1 & 2 and that solved my problem. It helped the car stay left.

I started 3rd in the first heat and they took 6 to the A Main so I wasn’t that tensed up and it was pretty uneventful. I was just trying to get through the heat without any problems and lock myself into the dash. I knew I had to get through the heat though because 4th quick with The WoO format is perfect. You are either going to start in the middle of the dash or up front. You’re never at the back. I just rode around and didn’t really do anything crazy and we came out of the heat in 3rd and locked ourselves into The Dash.

A 0 pill was pulled for the dash invert and as a result I started 4th behind Terry McCarl, Joey Saldana and David Gravel. McCarl won The Dash, Joey ran 2nd and I ran 3rd with Sammy Swindell finishing behind me in 4th.

Before the feature I still wasn’t sure if I was fast enough because McCarl and Joey had gotten way away from us in The Dash. I figured I could at least pull off a solid top 5. I knew restarts are crazy at Tulare and at WoO races in general because The Outlaws are like sharks on restarts and that’s where they get all of their spots.

I thought the 4-wide was cool because I got to start on the front row but Sammy beat me into turn 1 on the initial start of the feature. I ran 4th through turns 1 and 2 but Sammy went to the bottom in 3 and 4 and I smoked around him on the top and ran 3rd for like 2 laps.

I saw that the front 2 were running the top. It didn’t take long to catch Joey. I passed him on the bottom in turns 1 and 2. I had noticed that the Joey and Terry were a little bit hesitant getting into the corners and I just was kinda like balls to the wall. It’s not every day that you’re in the position to win an Outlaw race so at that point you’re just going to do whatever it takes.

Once I got Joey I knew I was good. I passed Terry the exact same way I passed Joey a couple of laps later. I just kinda blew it in on the bottom, slid up across and I slid so far that he didn’t have time to cross me back over.

Joey passed Terry as well because I can remember him on the outside of me for a few restarts. I chose the bottom every time on the restarts because there was a strip of moisture on the bottom of the corner and because you could hit the moisture down the bottom of the front stretch and then you could pick wherever you wanted to go from there. Having the choice to re-start on the bottom helped out a lot.

As the race went on a lapped car spun out and Joey slid to miss him and locked his brakes up so I think McCarl started lining up next to me on restarts.

Terry is VERY smart on restarts so I had to be very careful with him. He tried to pin me down on the restarts but being on the bottom was just such an advantage because you could grab all of that moisture down the bottom of the front straightaway.

From there on out I just tried to run a smart race. I hit the top of a few times and just tried to hit my marks and stay really patient. I was kinda running the slider line in turns 3 and 4. It wasn’t like the normal Tulare were you pound the fence. The following year when I won there again it was more of your traditional Tulare as we were hammer down around the top.

You can never really relax in an Outlaw race even if your car is really good because you can get a restart there at the end with 2 or 3 to go and they can snooker you. I didn’t get too worked up and I knew we were good because we were passing those guys.

It’s also tough leading with The WoO or starting on the pole because the guys behind you are searching around and you can’t really afford to search around and make mistakes and choose the wrong lane or something. It’s a lot easier to be running 2nd or 3rd with a good car.

I think we had a 10-15 lap run towards the end that went non-stop and I was the race winner and it was just really cool. I really didn’t know that I had the race won until I came out of turn 4 to take the checkers but I knew I was good enough to win when I was beating Joey and Terry on all those starts.

It’s impossible to describe the emotions of your first WoO win. You’re obviously excited and happy and so many other emotions. It meant so much to me to win for Paul, Trevor, my family and everyone who supports everything I do.

I’ve been fortunate enough to win with The Outlaws since then and have had some great things happen in my career. I’m really looking forward to everything that’s in front of me right now but I’ll never forget the first time I beat The Outlaws. 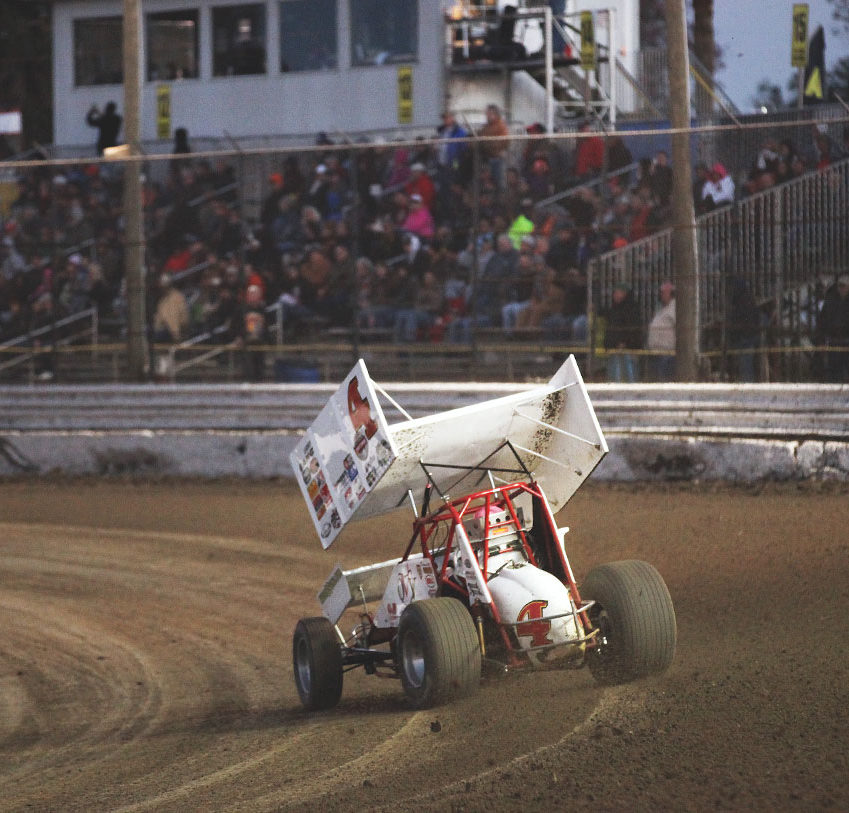