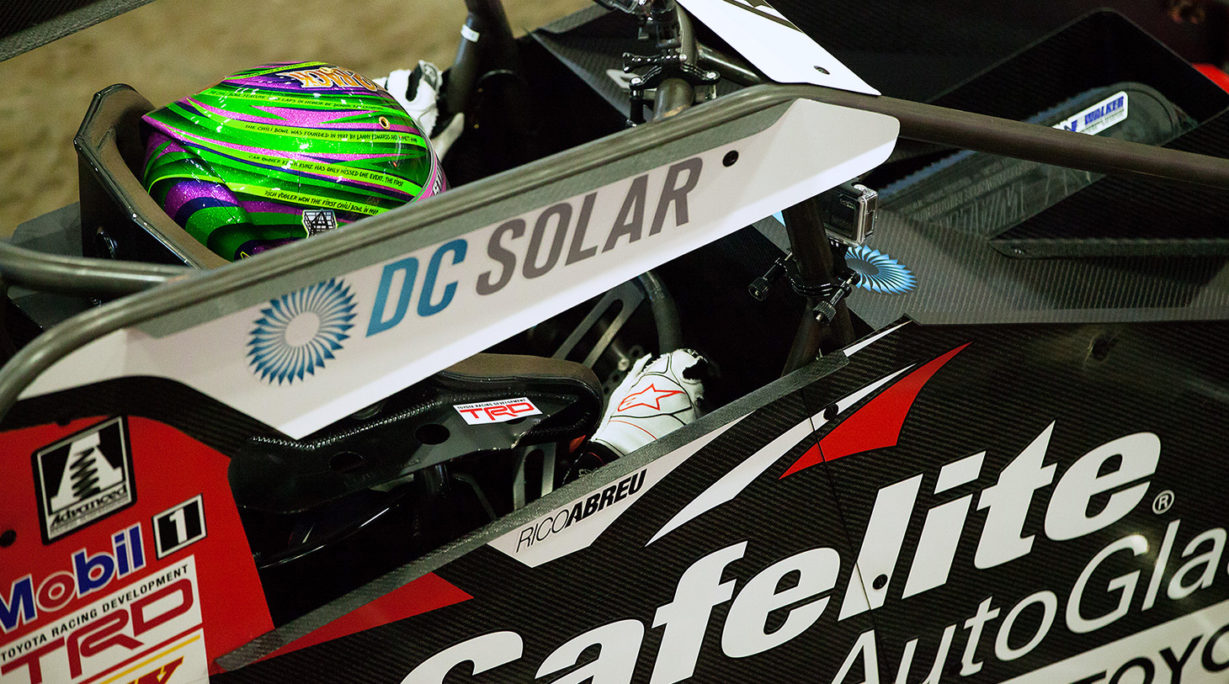 It has obviously been unbelievable to win The Chili Bowl in back to back years. Both were very important wins to me for different reasons even though there were some similarities in the wins. I was fortunate enough to win the preliminary night both years and I’ve been fortunate enough to be driving the best car for the best team in the building. I know I go on and on about Keith Kunz and Pete Willoughby but they are just phenomenal in terms of preparation and attention to detail.

I feel like this year’s Chili Bowl is going to be the toughest to win yet. Everyone has stepped up their game. Every year I come here I end up thinking “This is the toughest year yet”. We have lost Bryan Clauson and Kevin Swindell; two of the strongest contenders but everyone has stepped up their game and put so much more into their cars for this event.

This year you’re competing against those 5 Clauson-Marshall cars and you’re racing Sammy Swindell who you can never count out. You’ve got to go up against Tim McCreadie who always puts it in the show. You are racing Tracy Hines and all of these veterans that are always right there. They may have only won 1 Chili Bowl but there are a bunch of veterans that always find a way to put themselves in contention and that’s what this race is all about.

I think you can’t just assume this race is going to come down to The KKM team. ANYTHING can happen at The Chili Bowl. Look at Kyle Larson last year on his preliminary night, he had the race in the bag and got caught up with a spinning lapped car. Christopher was leading on Saturday night, a lapped car checked up to pull in and collected him. You don’t know what’s going to happen here.

The 2014 Chili Bowl was a real eye opener for me. I was obviously in a Kunz car, I had run 7th or 8th in my preliminary night and made the A-Main through the B. In the feature I ran right up to 3rd with 6 or 7 laps to go. I had just passed Kevin Swindell and was racing with him when I got a little too excited and spun out. Once I passed Kevin it really set in that “This is for real, I have a chance to win this race”.

My approach since then has become a little bit different. I’m more relaxed coming to The Chili Bowl. I just try to remind myself that Keith has got really good cars and I just have to do my job as a driver.

Keith is also so good at inspiring confidence in his drivers. The leadership in our stable is unbelievable. Our team’s leadership and Keith ability to instill confidence in their driver is one of the things that makes this team one of the greatest of all time. I’ve raced with Keith Kunz Motorsports (KKM) for 4 years now and I’m always impressed at how Keith can instill so much confidence in you with minimal communication.

Keith has such a good eye for seeing how good his cars are and how he can make them better. He can watch a race car on the track and before the car even gets back to the pit, Keith knows what to do to make the car better. Keith has a great notebook that he doesn’t run away from. I swear that for the last 20 years he’s been here he’s done roughly the same things to the cars. He’s got this notebook that he opens up that probably dates back to the 1988 Chili Bowl and he’s probably close to doing now what he did then. The craziest thing that people probably don’t even know is that the left rear shock that I won with in 2015 hadn’t even been dynoed since 2011.

In terms of your mindset for winning this race, the less you think about it, the better. It’s really easy to overthink things. You have to view it as just another race. You can’t come in here and treat it like you’re racing 370 other cars. You’re really only racing against a small portion of that field in general. You’re only racing against the guys in your heat race, the guys in your qualifier and you’re racing against the 24 guys in your preliminary A-Main. That’s it. You don’t need to sit there and throw big numbers around like 380 cars, or 90 cars in your head and feel like you have to beat every single one of them.

You have to minimize the big picture thinking about this race and run your own race. One thing Keith and Paul Silva have really taught me is to block out all of that outside noise out and just race the race track. They’ve taught me not to get caught up in what the guy next to us is doing or wondering what Sammy Swindell is working on during practice. Those things I just mentioned are what I worried about 4 years ago when I came to run this race. Now I just worry about what we have here and the connection between Keith and I.

I know I’m known as a hammer down, up on the wheel racer but I’ve really tried to run an intelligent race at The Chili Bowl the last few years. Last year I felt it was very important for me to be the first guy to get to the top when it got fast. I was obviously the first guy up there and as a result, I went from running 3rd to falling back to 7th in the first 40 laps. When you’re falling through the field like that you really have to have a strong sense of belief in yourself and your team. You have to understand that this race is not won in the first 45 laps, it’s won from lap 46 to lap 55. Those 10 laps are when you need to be a contender.

I don’t panic because I believe in Keith and his cars and I believe that late in the race is when his cars become really good. As the track gets wide, the fuel load burns off, you start dealing with tire wear and that’s when you have to start driving these things and searching around. You have to make sure the top hasn’t gotten too far around, you have to be aware of when the bottom line has moved to the top and that comes from experience. I’ve learned this from watching Christopher Bell and Kyle Larson and watching a guy like Donny Schatz.

It’s really cool to have so many people in this building that believe in me and believe that I can win this race again. If I don’t win this race though it’s not the end of the world. I’m still going to come back to this race for the next 15 years and try to win it again. If I don’t win this year it’s not going to be the last time I’m going to have a shot at winning this race. I feel like in general, I’m more prepared than ever to come here and defend my titles. I’ve got a lot of heart and I give 110% every time I hit the race track. If I lose the race I’m not going to burn the trailer down, if I do win it will be unbelievable and something I’ll never forget about because of all the people I have behind me and when I do win this race the atmosphere in the building is incredible.

When someone wins a race no one thought they could win or accomplishes something no one thought they could accomplish it changes people and their beliefs. I’ve tried to do that and it’s kind of the story throughout the last 6 years of my racing career. I feel like there have been people out there who didn’t believe in me and I’ve been able to change their minds. Hopefully, if you don’t believe in me now you will after this year’s Chili Bowl.