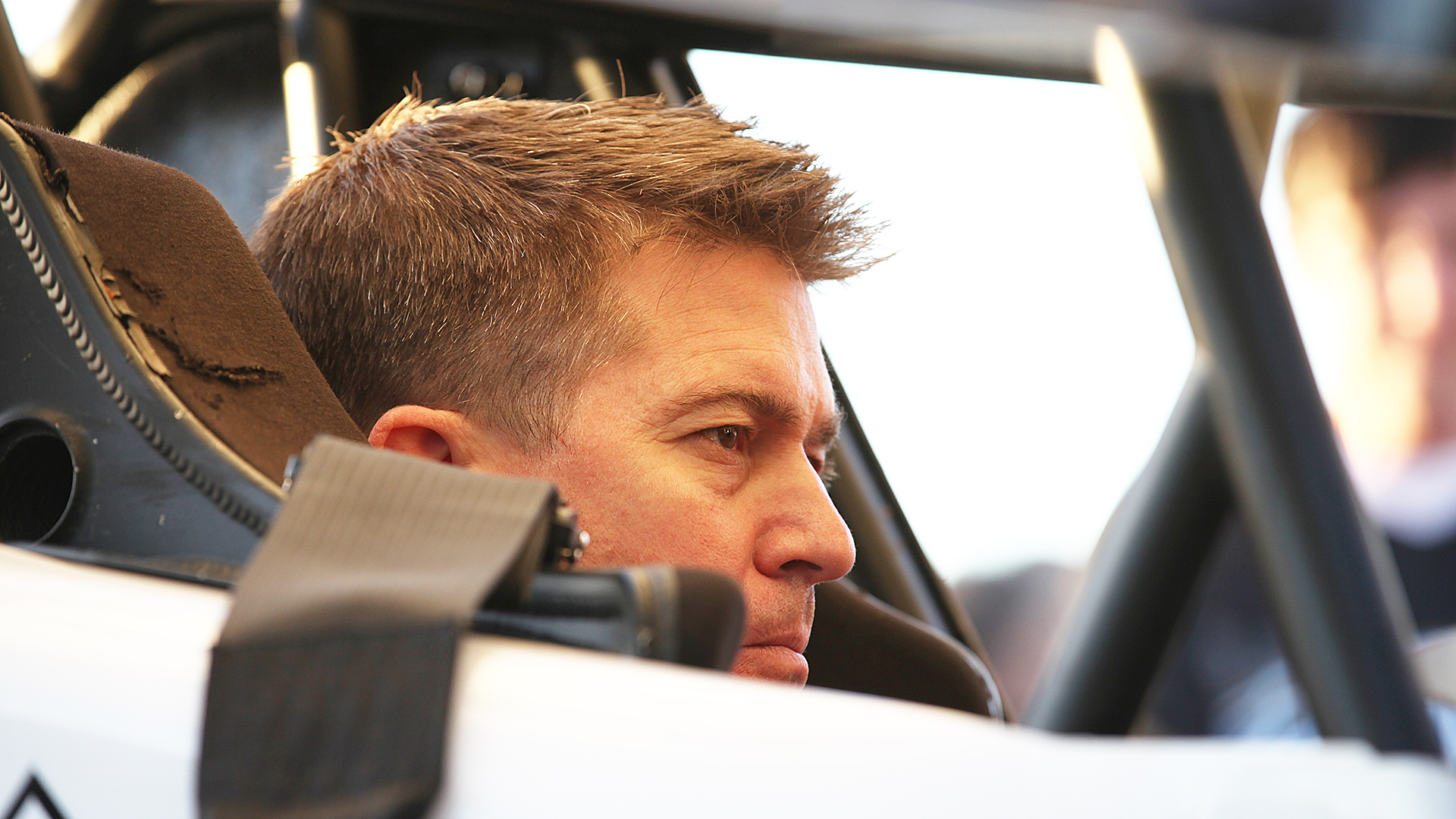 It was a struggle. I had raced the past 2 years for Tony Stewart Racing and I had gotten let go. I went into the winter and didn’t have a job.

I had known Rick Ferkel for a long, long time when he was a World of Outlaws (WoO) official and a Gumout official and I had always looked up to Rick. He asked me to drive his race car and he was really the only guy that called me to drive. So I was fortunate enough to get into Rick’s car.

We ran decent, we didn’t win a lot of races and we had a lot of bad luck. People laughed at us when I went into that deal. Rick’s an old school racer and he doesn’t care what the car looks like. He just wants to go out and be fast on the race track. When I first went there we had a J&J car that wasn’t new, we had 6-pin hubs on the front which didn’t matter to me because a race car is a race car.

In the past in my career I’d taken rides that maybe weren’t quite the highest end rides but it was always a conscious decision.

In the past in my career I’d taken rides that maybe weren’t quite the highest end rides but it was always a conscious decision. Out of sight, out of mind is my theory. I’d driven for Gary Stanton once and it ended. Later when the deal opened up in 1998 I was able to go back to it and that kept me on the road and in people’s minds. I try really hard to not burn any bridges because you never know what will happen in this sport. In that case it was really important because it kept me out on the road and landed me the ride in the U2 car with Warren Johnson. Being stuck in California really didn’t afford me the opportunity to  get out on the road so I thought once I was there I needed to stay out there as much as I could to keep myself in people’s eyes and in their minds.

So Rick and I went out and everyone kind of giggled at us when we first went out there and then they kind of had their eyes opened a few races in. Racing Rick’s car was not a bad thing at all but everyone has this perception when you’re going from an unlimited budget to a smaller budget and they look at you differently just because you’re not in some big truck and trailer going down the highway.[/vc_column_text][vc_empty_space height=”20px”][vc_single_image image=”3854″ img_size=”full” add_caption=”yes”][vc_empty_space height=”20px”][vc_column_text]My kids were a bit older at that time. My son Brayden was a teenager and I’d say my daughter Kylie was around 8 or 9. We had just bought a house and it was a big struggle to go from thinking you had a big WoO ride going into 2008, to being rideless, buying a house and trying to raise your family.

Rick and I struggled together at first and then we started running well. We started getting faster and faster. I won The Dash for a WoO show at Attica and had some bad luck and didn’t finish. We went on to Eldora and ran well. We were leading the heat race when the front nose wing fell off. Just little things kept happening. We were leading an All-Star race up in Pennsylvannia somewhere and we broke the stud off a right rear shock. It was just a lot of bad luck but we had a lot of fun.

Rick and I had some good runs together too. We went up to Lernerville for an All Star show and ran 2nd to Kenny Jacobs. I was having a lot of fun and we also ran 2nd to Byron Reed at Fremont a couple of times.

As a professional racer you need to be on The WoO tour and as the year progressed the door opened up for me to get behind the wheel of The Casey’s General Stores #6 to finish out the year on The WoO tour. The Outlaws are always where you want to be because you can make so much more money than anywhere else.

I had fully intended to return to Lonnie Parsons ride in 2009. We had a talk around Knoxville and Lonnie said that he was going to go racing and I was his guy and then things changed. He came up to me about a week later and said he was going to retire. Everybody has the right to retire and I understood that and was fine with it. I got on a plane to go to New Zealand and I talked to Lonnie that morning before I got on the flight to LA and he told me again he was going to retire so I told him to send all of my seats back. By the time I landed in New Zealand 11 hours later they had a press release out saying that Danny Lasoski was going to drive the car. It was kind of a bummer but that’s part of the business.

It can be a pretty stressful living driving a sprint car. It’s how we make our living, it’s how pay our bills and people think that just because you’re out on the road that you’ve got a lot of money. I’m just a normal guy who’s fortunate enough to get to race for a living but I mean if we get rained out or we have bad runs it can be tough. I race on a percentage so the better I run the more money I make so when you’re not running well there’s a lot of stress because you’re getting pressure from owners, sponsors, crew chiefs and everything around you. On top of that you’ve got your wife back home paying bills, trying to put food on the table for your kids and save money for their college tuition later on in life. People think we’re out just having a good time, having this party out on the road and it’s definitely not that.[/vc_column_text][vc_empty_space height=”20px”][vc_single_image image=”3855″ img_size=”full” add_caption=”yes”][vc_empty_space height=”20px”][vc_column_text]Once the 6 ride ended I was in New Zealand and then I headed to Australia. I was fortunate enough that a friend of mine gave my number to a guy that was going to start a 360 team and was looking for a driver. Fortunately for me they picked me. When I got there they had nothing. They had 2 race cars but nothing else so we had to build a team in month to get to the first ASCS race in Dallas. It was just me and 1 other guy. He lived in Memphis and I lived in Nashville which is 2 ½ hours away so I spent a lot of time driving back and forth to Memphis to put race cars together and get the team ready.

A lot of people think that us as driver’s, all we do is drive but there’s more to it. I’ll do whatever it takes to get racing. I did a whole year with The ASCS, me and 1 guy who wasn’t even race oriented he was just a friend of the owner’s that they trusted.

Racing is a tough business and sometimes other people’s misfortune is your lucky break.

We had a lot of fun on The ASCS that year and we did the whole year but they had a lot of rainouts. I think we only ran 19 races so it was a pretty big struggle to make ends meet.

Racing is a tough business and sometimes other people’s misfortune is your lucky break. In 2009 after Craig Dollansky and Kasey Kahne Racing split I’d talked to Kasey about driving their car but they were already kind of set on Cody Darrah as their driver.

Unfortunately Cody got injured in a car accident in Florida. I was just planning on running some races for Tom Buch and Bernie at Indy Race Parts. I’m not the kind of person to call and ask, I didn’t want to be that guy but Joey Saldana and I are really good friends and he reminded me that someone has to and is going to drive the car.

I made the call and fortunately it got me back on the road and really resurrected my career. Following the Tony Stewart deal my career was going downhill and when I got in the 91 car it took us a bit but once we got rolling we ran really well. We only won 1 race but we had a lot of top 5’s and a lot of 2nds. The ride really got my career back on track to get me where I was going.

One year later Cody was back so I was out of a job again but Kasey put a deal together with Dennis Roth to get me back out on the road again which was something he didn’t have to do but he felt with the way I’d run the year before I deserved another shot at it.

Since that I’ve been able to make a great living driving sprint cars. I landed a great ride with CJB Motorsports and we had a couple of great years on The WoO. 2016 is going to be another transition for me. I’m now driving for Destiny Motorsports and I’m still grinding out a living running up and down the road with The Outlaws. I’ve been very fortunate to get where I am today but it hasn’t been easy.[/vc_column_text][vc_empty_space height=”20px”][vc_video link=”https://youtu.be/gDdA2vhmgaY”][vc_empty_space height=”20px”][/vc_column][/vc_row][vc_row][vc_column][/vc_column][/vc_row]