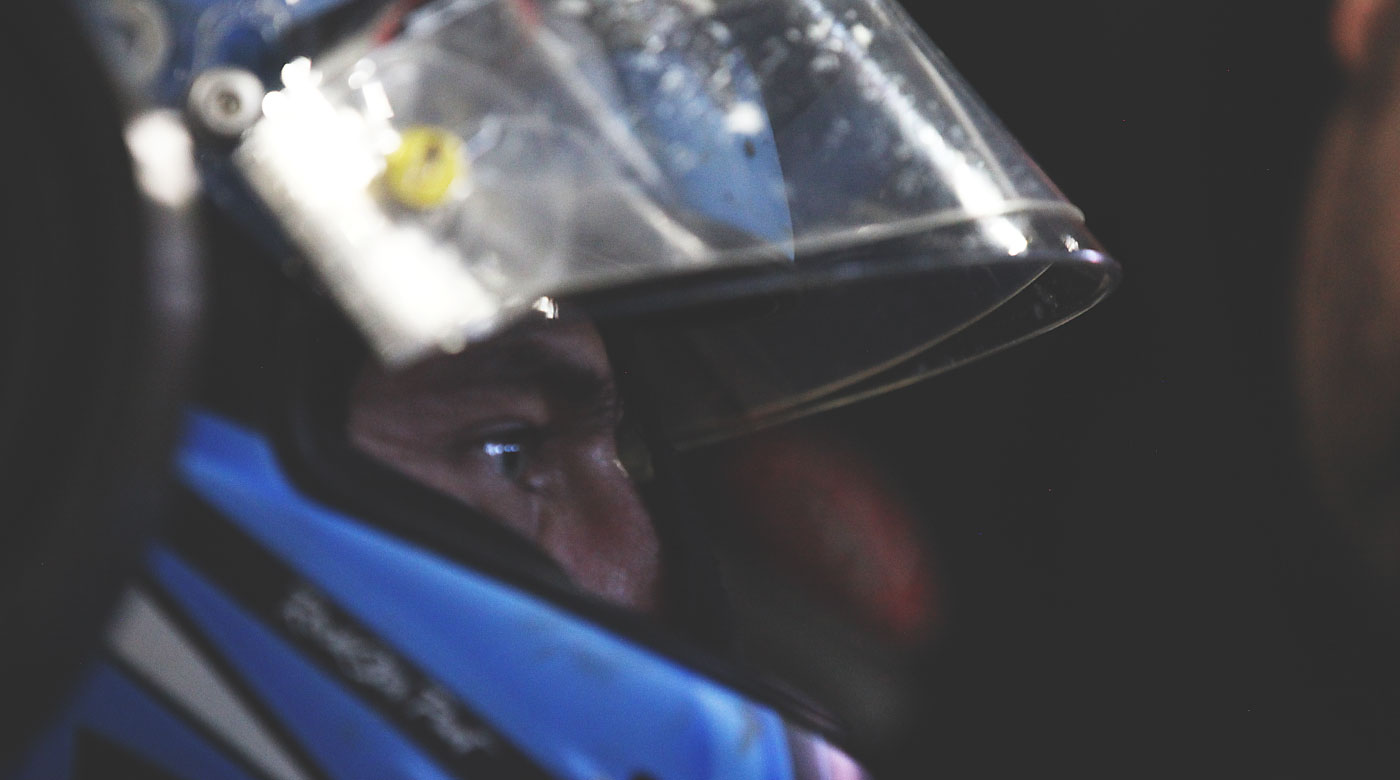 I had been racing for Rick Ferkel and we were trying really hard and I had been hoping to conquer the world with him but sometimes in racing things just don’t mesh together. As I realized things with Ferkel were going to be coming to an end I had started talking to Brian Sundby. In the end things ended with Ferkel. I didn’t quit and walk away or anything, we just kind of both knew it was over. Neither of us wanted it to happen but that’s part of racing and we both knew it.

As I headed home I talked with Brian and at that point I was hired. I swung into Newton, Iowa to see the shop and it was beautiful. Brian asked me what I like to have in a race car and that’s where we started our baseline from.

Brian wasn’t really too happy about that so he gave me the week off.

We won our first night out. It was the first of twin features that night at Knoxville in July of 2013. It’s really hard to keep your expectations down when that happens so at that point we wanted to win everything.

The next night out I hurt the motor. I actually thought I’d hurt the rear end so I tried to limp it through the feature and hurt the motor even worse. Brian wasn’t really too happy about that so he gave me the week off. We came back just before The Knoxville Nationals and had a good week.

It was probably the most confident I’d ever rolled into The Knoxville Nationals just because from the first time I sat in Brian’s car it felt like I was home. It just felt really comfortable. As a matter of fact the car was so comfortable that in an uncomfortable race car I was actually starting to become faster and faster yet which is hard to learn. A lot of times when you’re uncomfortable in a race car it’s because of the speed you’re developing in different parts of the race track than you normally would so you’re able to pass race cars in places you normally wouldn’t.[/vc_column_text][vc_empty_space height=”20px”][vc_single_image image=”3896″ img_size=”full” add_caption=”yes”][vc_empty_space height=”20px”][vc_column_text]We moved into The Nationals very comfortable and Brian just gives me a lot of confidence. He exudes a lot of confidence as well. I feel that and it’s kind of contagious. His dad told me from the get go to just be calm, be confident and have fun.

At Knoxville during The Nationals it’s imperative that you draw well. We drew decent, we were not far down from the infield tower.

Time trials at Knoxville are crucial. For me it’s hard to really know if you can hit the bottom or not and that’s really the deciding factor in determining if you’ll have a good lap. A lot of times everyone will be on the top and someone will go low and hook the bottom and turn a fantastic lap. If I think the possibility of hitting the bottom exists I’ll generally try that on the first lap and if I don’t feel like I can hit it I’ll just give up on the bottom and try to really rail the top as hard as I can.

For me personally I think if you enter too wide into the bottom a lot of times when you get there your car gets too tight. I try to enter a little bit lower and use the centrifugal forces to break the car and help the car rotate and that helps me get off the bottom a little bit better but it really just depends.

Often times I think everyone is just too tight for qualifying. I think you need to have a free race car. The car needs to rotate. If you can’t rotate you can’t hit the bottom and then you miss it coming off. You feel like you were loose but what really happens is you were tight for just a second, got out into the slick and then they spun all of the way across it. I feel like a free race car makes you a lot faster in qualifying than a tight race car.

Fortunately for us everything went according to plan and I was able to lay down a great time trial lap which put us 3rd overall.

The fast time trialers at Knoxville are inverted to the 8th starting position in the heat races and you have to run top 4 if you want a shot at running up front on Saturday. We had a great heat race and shot all of the way up to finish 2nd behind Hannagan in the heat race. On the way through we passed some really good cars including Ian Madsen, Brady Bacon, Jonathan Allard and most importantly Donny Schatz who didn’t transfer out of the heat.

To be quite honest it was Pennsylvania that prepared me for hit races like that. You don’t have a lot of time and you’ve got to get to 4th. When I first got to Pennsylvania I was pissed off because everyone was driving so dirty. The PA guys will move you, slide you or hit and I didn’t really realize that. I grew up racing in The Mid-West and there’s always 2 grooves and you don’t really need to hit each other you and it wasn’t so bad. Even on The Outlaw deal it wasn’t so bad but out there, I mean to tell you, they’re going to move you.

The PA guys are racing to eat and it’s so cutthroat. If they can get to you they’re going to hit you, they’re going to move you, they’re going to do whatever they can do to get the spot. So I kind of learned that aspect of racing out there. I learned to never quit charging because as soon as you settled into a spot like 2nd, 3rd place would move you out of the way, 4th place would go by and the next thing you knew you were 5th. You just can’t catch a break if you’re not always charging and racing in Pennsylvania really taught me that. I learned a lot, not necessarily how to drive people dirty but how to get them out of your way.[/vc_column_text][vc_empty_space height=”20px”][vc_single_image image=”3895″ img_size=”full” add_caption=”yes”][vc_empty_space height=”20px”][vc_column_text]It was kind of funny though because when I came back home and raced like that the first thing I started hearing was what a dirty driver I was. All I could think about saying was that they should try racing in Pennsylvania for a weekend.

Once I’d gotten through the heat without issue it was time to run our preliminary feature. The preliminary feature we started off okay but the car just kept getting tighter and tighter and I couldn’t get the car mobile. I dropped back quite a ways and that really hurt us. On the final lap I was able to get back past Paul McMahan.

Our point total ended up being 4th highest for the week which lined us up outside of the second row for the Saturday night finale. To me that was unbelievable, I mean to be in the front 4 of the of the wide at The Knoxville Nationals is a dream come true for anybody I would imagine.

Basically my plan for Saturday night from the outset was to take it easy and not do anything stupid for the first 25 laps. I knew Schatz was starting in the back and I really didn’t think he’d come through the field that fast.

I took the race fairly easy in the first 25 laps and held a top 5 position at the break. In retrospect I wish I’d have driven those opening 25 laps harder.

Once Schatz got to me he raced me hard for 5 or 6 laps. There was about 20 laps to go and I was running 3rd at the time. Quite honestly our car was good enough to beat Donny. Earlier in the race I was coming up behind Saldana and I was going to roll off the bottom but as soon as I got behind him I had the air taken off my wing, got tight and I just slapped the fence. I hit the right rear real hard and it started to go down on air. It actually made the car pretty good for a while but on the last 2 laps it was kinda evil. Up until those final 2 laps if I had moved around more and found the bottom it would have been extremely hard for Schatz to have gotten around me. I also would have been in position to take the guys in front of me by surprise. If I’d have been a smarter racer that race could have been ours which is really hard to swallow when you think about it and realize that it’s The Knoxville Nationals.

I almost got Brian Brown at the line. I’d passed Saldana and ran down Brown. Brown was getting worse and worse for whatever reason, I really don’t know what the deal was. My right rear going down and being as tight as it was I was able to keep the car wide on entry into turn 3 and then suck it down to the bottom coming off 4. Brownie was the opposite. Brian had to enter on it but he couldn’t hold it and he kept slipping up coming off of 4 so I was really gaining on him. We went by the white flag and I went outside of him in turns 1 and 2 but I couldn’t close him down in time before we got to the crumblies coming off and he got to keep in the rubber so he jerked my by like 4 car lengths down the backstretch. We ran down into 3 and I got underneath of him coming down to the line  but I couldn’t quite get by him for an extra  $36,500.

The 2013 Knoxville Nationals was an incredible learning experience both for myself and our team. Over the past couple of year’s we’ve gotten very fast at Knoxville on a weekly basis. I hope in 2016 we will once again be in contention at The Nationals and I can promise you that I will learn from the mistakes I made in 2013 and do everything I can to knock of Schatz or anybody else who may stand in my way.[/vc_column_text][vc_empty_space height=”20px”][vc_video link=”https://www.youtube.com/watch?v=ZqbUIx719Is”][vc_empty_space height=”20px”][vc_column_text]That week, including The Capitani Classic the car took in like $45,000. That is life changing money and for a guy like me who  was trying to make a living and had struggled earlier in the year it was a pretty big deal.

I think if I’d have really charged I’d have found out that I had a better car than I realized.

I was in that situation for the first time and I was ultra-conservative and trying to take my time. I think if I’d have really charged I’d have found out that I had a better car than I realized. A lot of times ½ a MPH or an MPH makes a huge difference  when you want to move around here or there. So that was probably the biggest thing, I just didn’t charge hard enough or early enough.

Overall the 2013 Knoxville Nationals were an incredible experience. We took a new team and ran really well. I learned a lot as a driver but I made some miscalculations as a driver. Since that race our team had grown stronger and faster and I’m hoping that this year the lessons we learned will help us move 2 steps higher on the podium in 2016.[/vc_column_text][/vc_column][/vc_row] 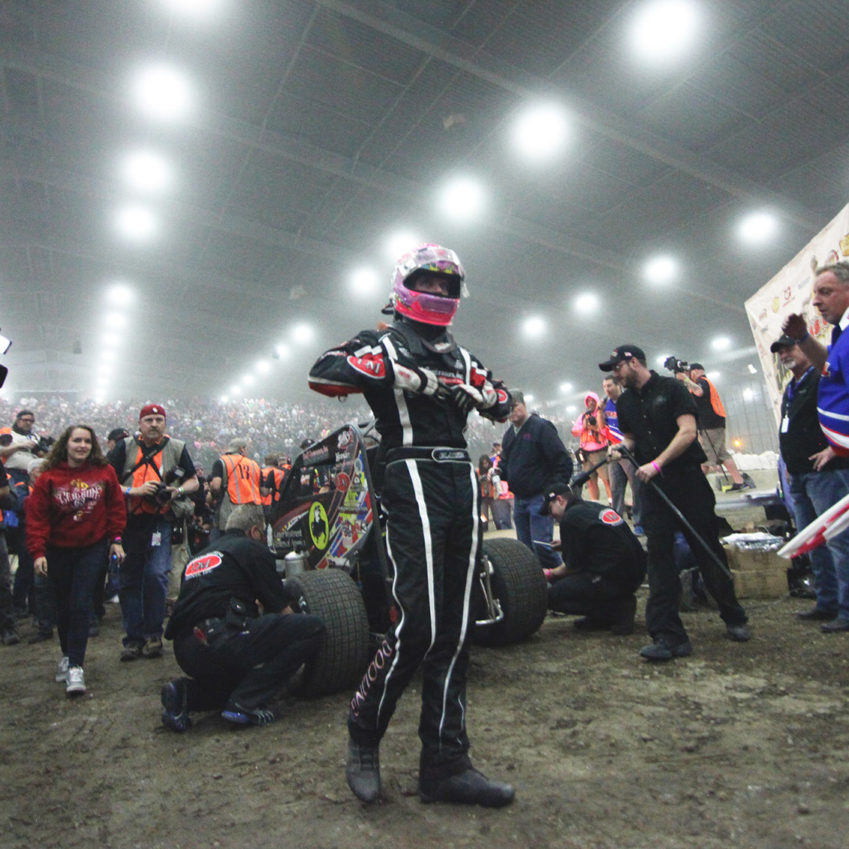 Four Laps in May