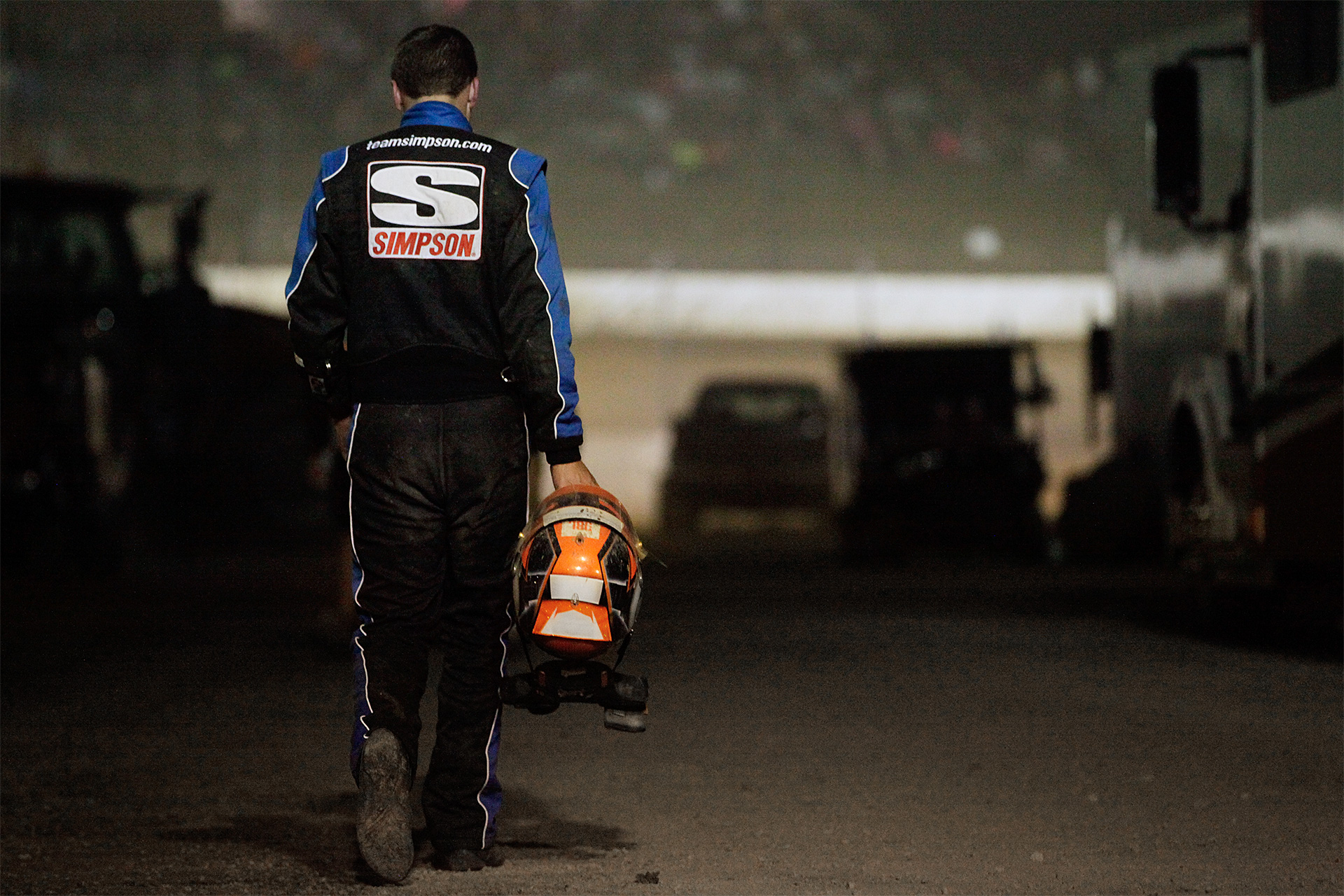 A dejected Christopher Bell walks back to the pits from his wrecked car in the late stages of the 33rd Annual Kings Royal. Bell was running 2nd before he clipped the turn 4 wall. ( Jeffrey Turford / TDP )
Featured

I was a micro-sprint racer, that’s what I was labelled as and that’s what I was. I remember going to Little Rock, Arkansas to watch The Short Track Nationals in 2011 and thinking how cool it would be to be part of that event. I never imagined that over the next 3 years that I would play a role in the outcome of each race or that someday I might possibly win it.

I moved up to Ohio in mid-July to race a 410 the next year with Rick Ferkel. Rick was really the first guy who gave me a chance to become more than a micro-sprint racer and for that I’m forever grateful.

We had run about 20-25 races together and then a 305 team had their driver get injured and needed me to shake down their new car before they went to Little Rock for The Short Track Nationals. The Davis Brother’s (Bobby and Al) asked me to run their car and I ran it twice in the Ohio area and we ran really well. As it turned out their driver never healed up in time so they asked me to run their car at Little Rock. It was pretty cool, this 305 team that wasn’t really known nationally with a driver who wasn’t really known nationally heading down to run one of the biggest 360 races of the year together.

We were pretty respectable whenever we were able to run our practice laps and in our heat race I started 5th. As luck would have it, it rained in the middle of our heat race. We had a couple of good guys in our heat, I think Greg Wilson was in there and Brady Bacon as well so I knew that getting to 3rd was going to be pretty tough.[/vc_column_text][vc_empty_space height=”20px”][vc_single_image image=”3833″ img_size=”full” add_caption=”yes”][vc_empty_space height=”20px”][vc_column_text]The next day our heat race was the first thing that ran. I restarted 4th or 3rd and the next thing I knew I ended up getting by Brady to go from 5th to 2nd which put me in a really good position under The ASCS passing points system.

From that point on I think I started 6th in the qualifier because I was in 3rd or 4th in points and I was able to move up through there to 3rd. All of the sudden I found myself sitting on the front row of the feature.

We were content just to be there. If we had made the feature on Saturday that would have been great and here we were on the front row of our preliminary night feature. All of the sudden it became real. The Short Track Nationals is like The Chili Bowl, you don’t go there to make the A feature, you go there to say you raced it and that’s how our team felt.

I fell back early in the feature and ended up running 3rd. We had moments where we were better than the leaders and it was becoming a reality that we were actually fast.

I was chewed up and spit out in the dash.

The top 3 cars from both nights lock into a Dash on Saturday night to determine the top 6 starting spots. The race utilizes a revenge draw format in which you pick a number and give it to another driver. If you think the driver is going to be tough, you give them a higher number. If you think they are going to be easier to beat, you give them a lower number. I was given the 2 which was the other guys in the dash saying they didn’t expect me to be tough to beat.

I was chewed up and spit out in the dash. I thought I was going to be okay early but Jason Johnson and I got together and I ended up running 6th in the dash. My confidence had been killed.

Any confidence that I’d lost came back the second the green flag dropped in the feature when I realized that the guys had nailed the setup on the #40D. The track was slick from top to bottom, there wasn’t much of a bottom, there was no cushion. When we took the green my car was so good. No matter where the other guys went I could go somewhere else and pass them. I figured out a line where I could enter up and make my straightaways really long and get MPH doing it that way. Eventually I ended up taking the lead from Gary Wright. Gary Wright!!![/vc_column_text][vc_empty_space height=”20px”][vc_single_image image=”3834″ img_size=”full” add_caption=”yes”][vc_empty_space height=”20px”][vc_column_text]Once I passed Gary for the lead I led the majority of the race until lap 26. I had gotten content running the bottom and Paul McMahan was coming. Paul actually drove around me once but the yellow saved us and I got the lead back.

I was looking around under the yellow for help. McMahan had pressured us for several laps and was clearly faster than us. I had run the bottom and he had drove around me. Now I had the lead back and I wasn’t sure where he was beating me or what to do but at Little Rock there really isn’t a place for your crew to signal you.

We went back to green and because Paul had driven around me on what I thought was the top, I went to the top. It turned out there was rubber in the middle that I wasn’t aware of. I went to the top, way above the rubber and McMahan drove by me on the bottom.

The last few laps clicked off pretty fast. Paul got kind of stuck in lapped traffic but there was no way I was going to get around him and he won.

Losing that race still stings a little to this day but it’s cool that I got beat by a guy like Paul McMahan.

It hurt so bad to get beat like that but at the same time, we didn’t even expect to make the race. Losing that race still stings a little to this day but it’s cool that I got beat by a guy like Paul McMahan. It was my first time at Little Rock, my first Short Track Nationals and we ended up getting beat by an Outlaw. I was still really bummed though because I led all of those laps and I didn’t win but that’s racing I guess.

The next year I came up one spot short again. Unlike the previous year there was no heartbreak. The 2013 Short Track Nationals was probably one of my most rewarding races as a driver. I was back at the race with The Berryman #31 and a totally different team and it meant a lot to me to back up the previous year’s performance.

The Saturday night track had ended up being really rough and heavy and I had to run through the B Main. I started in the back, probably around 13th or 14th and I got all of the way up to 2nd but Sammy Swindell ended up winning. So once again I got beat by one of the best sprint car drivers in the world.[/vc_column_text][vc_empty_space height=”20px”][vc_single_image image=”3835″ img_size=”full” add_caption=”yes”][vc_empty_space height=”20px”][vc_column_text]That race meant a lot to me because I was able to go back to back running up front and prove that I belonged at one of the toughest races of the year with 2 completely different race teams.

I went back in 2014 to win. I had enough of 2nd. I went back with The Berryman #31B team so I was comfortable with the team and I felt like we had a great shot.

We went through the preliminary night and it was really wet and we won.

On Saturday night though the track was completely different. The track was so dry. We were really struggling. I think we only ran 5th or 6th in The Dash and we were no good in hot laps. I really didn’t think there was any hope heading into the feature.

By the time the feature rolled around my main crew guys; Bobby Kraft  and Jerry Russell had gone to work and given me a really great car. To go from as bad as we were to getting the car that good was impressive.

I wasn’t able to just drive through the field like I had the year before. The way the race played out I kind of had to pick guys off one at a time. Brian Brown looked like he was going to be pretty tough to beat but he hit a hole and biked up so I was able to drive by him.

Short Track Nationals is such a long race that it’s easy to get complacent so you really have to stay on yourself to keep digging.

I knew I was pretty good at that point but I had learned from my first year at Little Rock that you can’t get content. Short Track Nationals is such a long race that it’s easy to get complacent so you really have to stay on yourself to keep digging.

I didn’t get to the leader; Aaron Reutzel until the later stages of the race but I kind of knew how the race was going to play out because I followed him and kind of sized him up and knew what his car was capable of.

It didn’t set in that I was going to win the race until I drove by Aaron. I knew that my car was better than his and since it was so late in the race I was pretty sure there wasn’t going to be anybody coming.

Words can’t describe how it felt to drive under the checkers. 4 years before I was watching this race, idolizing everybody in it and now, after being so close the 2 previous years I had finally done it.

The Short Track Nationals has played such a major role in my career. My 2nd place finish in 2012 was the first time I was really noticed on a National stage. It was the moment that caused Pete Willoughby and Keith Kunz to take a shot at me after I’d perked their ears up in a midget. It’s a race that every serious sprint car fan needs to see at least once and I’m so honored to say that I’ve won it.[/vc_column_text][vc_empty_space height=”20px”][/vc_column][/vc_row]