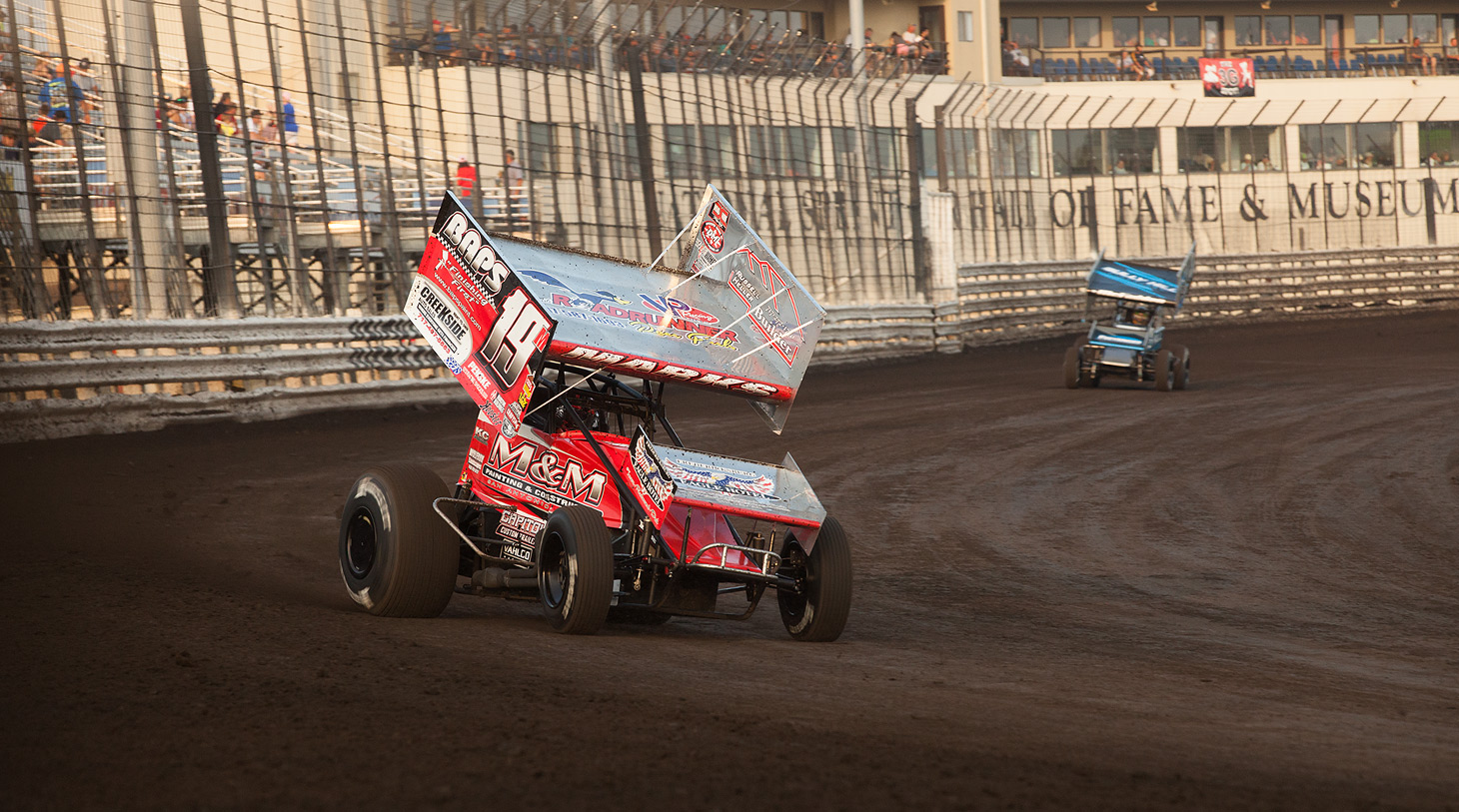 Taking The Next Step

Travelling with The World of Outlaw Tour (WoO) is something that I’ve always wanted to do and that has always been a goal of mine. It was always something I saw myself doing in the future but I could never quite figure out the route I wanted to take to get to that point.

Over the years I put my name out here and there and tried to jump in a few different cars. I went through a lot of rejection. I feel like 2017 is a good year to do this because I know I wanted to do this full time.

We looked at doing The All Star Circuit of Champions but that didn’t quite make sense for us financially. I looked at maybe just quitting my deal and trying to put maybe 2 or 3 good part time rides together and do what some other people have done and just race all over the place. I have a wife and a baby now though so it didn’t really seem feasible for me to do things that way.

There also wasn’t a lot of stability in doing that. I could be running well for someone but if someone comes along who has a bigger name that team could up and fire me and I would be left with nothing. I also feel like I’m not established enough that I could go out and find a ride for the next week. I just feel like I have more work to do in terms of getting established and getting my name out there and it seems like The WoO is the best way to do that.

I’ve always wanted to go on the road and own my own sprint car team with The World of Outlaws but I never seemed to have the opportunity to go ahead and do it.

I sat down and crunched a lot of numbers. I talked to all of my sponsors and convinced my parents and they agreed to support me with what I want to do. I sat down and did a lot of work to figure it all out and it just made sense. We decided that we’re going to take the risk and we’re going to go out there and do it.

We are starting out small with this. It’s like a startup business, you start out with nothing and you just try to grow it as big as you can possibly grow it. That’s kind of our plan, we’re not going in over our head. We aren’t doing this deal to spend a bunch of money and see how long we can last. I’m trying to make this deal last as long as I can.

The first year is going to be tough but I’m hoping we’ll get through it. The second year should be a little easier and hopefully the third year will be easier yet.

I’ve always made the conscious decision to travel knowing that down the road the plan was to be a full-time race car driver one day. Travelling was what I had to do to accomplish those goals. It’s great racing in Pennsylvania, it’s awesome. There are awesome fans and awesome competition but you can get stuck in a rut there and sometimes you just can’t get out of that rut. I didn’t want to be one of those guys that get stuck. Some guys are content with it but I want to travel the country.

When I was younger and started out in go-karts we started out at a local track for a few years and then we started going up and down the East coast. My dad kind of introduced me to a little bit of travelling like that and from a young age I always really loved it. When we became financially stable enough to do some travelling with the 410 I loved it as well. It’s so much fun and I’ve had a lot of good times as well as some success doing it. Each time we did it we got better and better and got comfortable with it so a decision like the one we’ve made becomes that much easier to make.

Pennsylvania is really tough because back home you really have to race the racetrack itself a lot. Very seldom do you get an easy track or easy surface to race on. When you leave it’s just a whole different world. Yes, the Pennsylvania competition is incredibly tough but when you get outside of PA and have to travel yourself the competition can be just as tough or even tougher.

For a guy like me going out to Ohio, things can seem so much different. Ohio has no walls, I grew up racing with walls. You get out there and you run up against the curb and to the right is just a curtain of black, it’s deceiving, it’s hard to get used to. Little things like that make it hard to get up there, you think you’re up there but you might not be high enough. It’s just small things like that which make it difficult when I travel and you just have to adjust to it. Some people adjust slowly and some people adjust much more quickly.

When we first got out and left Pennsylvania we struggled but that’s part of it, that’s how you learn. As we travelled more there were times that we got our butt kicked but there was also times where we were pretty good.

Eldora was one of those places where going into it I told myself I was just going there to get some laps and that I was probably going to get my butt kicked. We went there for the first time and we actually ran pretty well early in the night and then the track got really slick and that’s when we really fell off. We learned some lessons that night.

We went to some other shows in Ohio like The Brad Doty Classic at Attica. Our first time at Attica we were bad. We were terrible and it surprised me. I thought we had a pretty good short track program and I thought we were going to be pretty good there. I got my butt kicked, it was one of those deals where I didn’t think I would but I did.

We have 3 complete cars and we have 4 motors. We just got our 4th this past season. Our team is small compared to what the other guys on the tour have but we also have more than what some other guys have out here too. This is my 8th season and it’s taken us 7 years to build up what we have. We started off with 1 car and 1 motor. My dad told me we’d race once a week at Lincoln and we wrecked it we would be out a couple of weeks.

The Outlaw deal is going to be very tough. An area like the West coast will be very tough in terms of having to plan what cars we’re going to run, what motors we’re going to run as well as making sure that we don’t put ourselves in a situation where we have too many laps on a motor. It just one of those deals where we are going to have to be smart about planning for what we have. We don’t have the money to buy more money or overspend so we have to be pretty careful.

I have Kevin Osmolski and Jesse Lentz. Jesse has been on my team since I started racing 410s. He started with us when he was like 15 years old and has been with me ever since. He actually only started to do quite a bit on the car about 3 years ago and he’s turned into a great guy. Kevin came on board with me in 2016, we meshed really well and get along very well together. Kevin will help on the setup end of things.

The crew situation is really good for me because I’m not going out on the road and having to get to know two new guys that I’m not really comfortable with yet. I decided when we put this deal together that I would offer them the opportunity first and I’m glad they both agreed to come out on the road. I’m going on the road with two guys I’m comfortable with, that I know very well and that will make it so much easier for me.

I told my wife; Megan from day 1 that this was my goal. I was straight up with her right from the beginning. I told her what my plans were, that I was committed to it and that I was hoping she’d support me and commit to it as well. She’s gotten so involved in racing and loves it just as much as I do and has been so supportive of everything I’ve done. She’s been great.

When we first met we lived two hours apart so right from the start in our relationship we dealt with distance. We lived the first few years of our relationship like that until we bought a house together. I think this is a bit of an easier transition for us than a normal couple because we have been apart before.

It just makes things so much easier when my wife and parents are so supportive of me. I know it’s going to be hard for them because they’re not going to be able to go out on the road with me. It’s just me and my two guys after racing 17-18 years with my family. They’ve been to almost every single race. It’s a change and change is always hard but I think this will be worth it.

My goal is to finish 8th in points and if I did that I’d be happy with that. Anything else would be a bonus. I am aiming to average a 10th place finish which I think is a fair goal to have. I know going out to the West coast is going to be the toughest portion of the season because I’ve never raced out there before. I don’t know the tracks and I don’t know the type of clay they have. I know that they run some different things out there in terms of wheel offsets and little things like that which we’ve never run before. Those are the things you have to learn and figure out and it’s tough to plan for those sort of things because we’ve never done this and I don’t know what all of those things are yet.

I have a couple of friends that I can lean on out there but they are also my competition. I know they’re not going to spill their guts to me.

When we get through the West coast, and into the Midwest, I’ll feel a lot more comfortable. We’ve run pretty well at tracks in the Midwest when we’ve hit them. I feel very confident that I can compete with these guys in that area and hopefully one day down the road we’ll have a championship winning team. It may take a while but that’s my goal and that’s what I’m going to work towards.