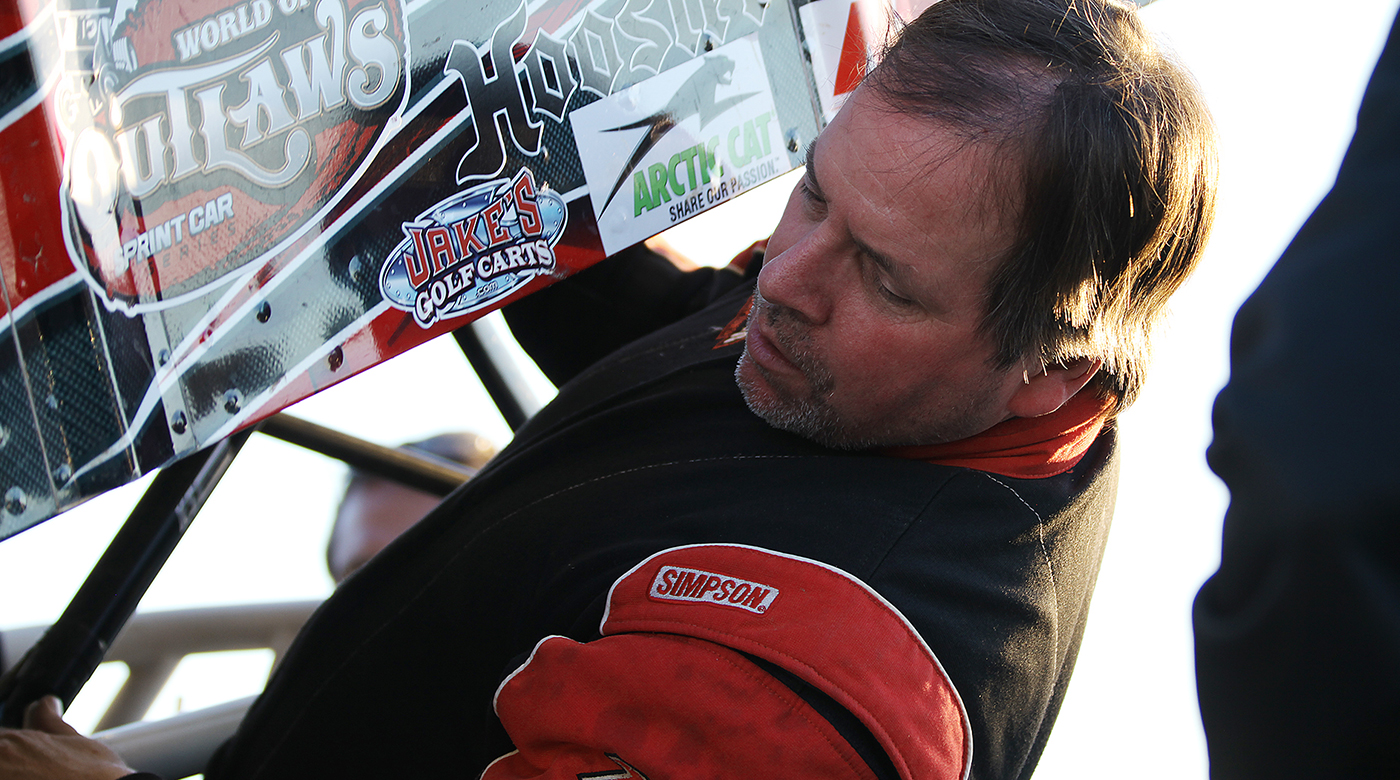 2010 was a pretty awesome, we were bad ass. We won 21 features and it seemed like everywhere we went we were in contention to win. Our whole team’s spirits were high coming into Knoxville and it seemed like things were all coming together.

We went into The Knoxville Nationals that year believing we were good enough to win. Everyone on the team was doing all of the right things and we really had an awesome team, Brian Kemenah and I were clicking and you could just see it and I could feel it. Everything was going smooth and we came into the race with a lot of confidence. We still knew we had to put ourselves in a position though to see if we could actually do it.

To be honest I don’t really remember many of the details on our preliminary night. We set quick time but we didn’t get out of the heat. We won the B, started 21st and came through the field pretty nicely. Like I said, I don’t remember much, I do remember having to run the B because we missed getting out of the heat by 1 spot.

You do know when you’re running that B that when you’ve qualified that good that all you really need to do is just get through the B and finish the feature and you’ll be in a good spot, you’ll probably start in the top 12 with the way the points system works.

When we rolled out for hot laps on Saturday night we weren’t guessing anymore. We knew what we were doing and we knew what worked. There’s years where it seems like every time you roll out in hot laps you feel like like you’re going to be good that night and that was one of those years. I’d figured out through the year how take care of our tires, how hard to push it and when to take care of them.

We just weren’t guessing about anything any more, Brian and I as a combination was incredible. We knew we were going to be good and at the end of the day I just had to be smart. Brian had nailed the car like he had all year and I knew it was up to me. I knew I was going to have a car that could win but that I was going to have to keep my cool and my confidence up.

Early on in the race we were racing Steve Kinser pretty hard for about 4th or 5th. At that point all I wanted to do was keep up and save our equipment. Here I am sitting there saving it and it kind of seems pointless because we get to halfway and we changed tires.

I was actually arguing with Brian and saying that the tires were just coming in and not to change them. I lost the argument, he put new ones on. We didn’t change anything else.

We struggled for about 5 or 6 laps after we went back to green before we really got going again. Once we got going again I knew I had to take care of them and not heat them up trying to keep up. I remember at first I was really scratching to keep up. That’s why I didn’t want to change the tires.

You get worried. I think it took about 5 or 6 laps and the it was like “Oh, there we go” and then I was able to calm down.

We spent much of the second 25 laps running 3rd and 4th. I was just trying to keep my cool. I saw that Brown blew a tire and Sammy blew a tire. They were down and out, I mean they were racing so friggin’ hard and at that time I could see what was going on there. You could watch them and just know that their cars weren’t going to last but we were going to have to deal with Donny.

Donny and Sammy got to racing hard and Donny started using his car up because he was racing so friggin’ hard. I don’t know if he blew up, I think he lost a cylinder or something happened there. They were all just racing so hard and when you race that hard something is eventually going to happen. I know as driver’s we’re supposed to race hard but it’s such a long race and you have to save your stuff and take care of it. When you’re racing that hard the odds of something happening and biting you in the ass go up so high and all that work you did ends up being for nothing.

As Donny and Sammy battled I just tried to make sure that I was at least keeping up with them in case something did happen so I could take advantage of it. Eventually Sammy blew his tire.

I pretty much made up my mind that I was going to try to slide Donny in turn 3 and try to get in front of him and make him check up on the restart or maybe do something he shouldn’t. Fortunately it played out like that and it worked. I got asked about that slider later and to me it didn’t really matter if I cleared him, it was for $150,000 and it’s The Knoxville Nationals. I’ve seen late sliders happen all of the time and now I had the chance to do it and it worked. I know Donny had problems but still, at the end of the we’ll take it.

I think times have changed. Back then I honestly believed I had a chance to beat Donny going into that race. Now after you’d seen Donny come out of the B and win the race and win so often I’m not sure if any driver TRULY believes they can beat Donny. I think other guys have had chances to beat Donny and threw it away because they lost the mental battle with Donny. It’s very hard to convince yourself you can beat that guy because when you look at his record the last 15 years here it’s incredible.

I was calm the whole race until I took the white flag and then I thought “HOLY SHIT!”. Fortunately you don’t have any time to think out there, well, you do, but you don’t. I nailed 1 good and got off turn 2 perfectly.

It’s so hard to run the bottom there. You’ve got all of this pressure and all of this heat that you put on yourself . I took the pressure off of myself though by making it through there really well.

By the time I got to turn 3 though I was losing my mind. I ran it so hard and just missed it. I slid out and I was just waiting for Donny to drive back by. I remember I came off of 4 and I was just wondering to myself “Where are they at?”. Before I knew it I was driving under the checker and thinking “Holy shit we just won!”.

It was a long night after we won. I remember Jason Sides taking us to breakfast at about 7 am the next morning and then we left at 9:30 to go home.

Winning that race is bad ass. All of our hard work had paid off. Everybody on our team deserved to win that race. I just got to stand back and be proud as hell. Those guys had given me the opportunity to win The Knoxville Nationals and it was my job to give it back to them. It worked out great.

It took awhile for it to even hit me that we’d won The Knoxville Nationals. When I go somewhere like The National Sprint Car Hall of Fame and Museum and people talk about it I feel great. It’s hard to explain. I accomplished something that most people in life never accomplish so it means everything. It’s all I’ve ever lived for and I’ve been racing for 32 years now since I was 15 years old. Sprint car racing is all I know and all I’ve done.

Before that night winning that race was a dream. We had built such a great team with Brian Kemenah, 5-0 and James Chambers and you realize that something like that is actually possible. That’s when you see all of the pieces of the puzzle coming together and then you realize that you can win anywhere. You see all of that hard work put in and we were the team to be rewarded, it doesn’t happen like that all of the time. So many people put so many hours in working on these cars and so often racing will just kick you right in the nuts anyway. To have that effort rewarded that one time makes everything we did worth a lifetime.