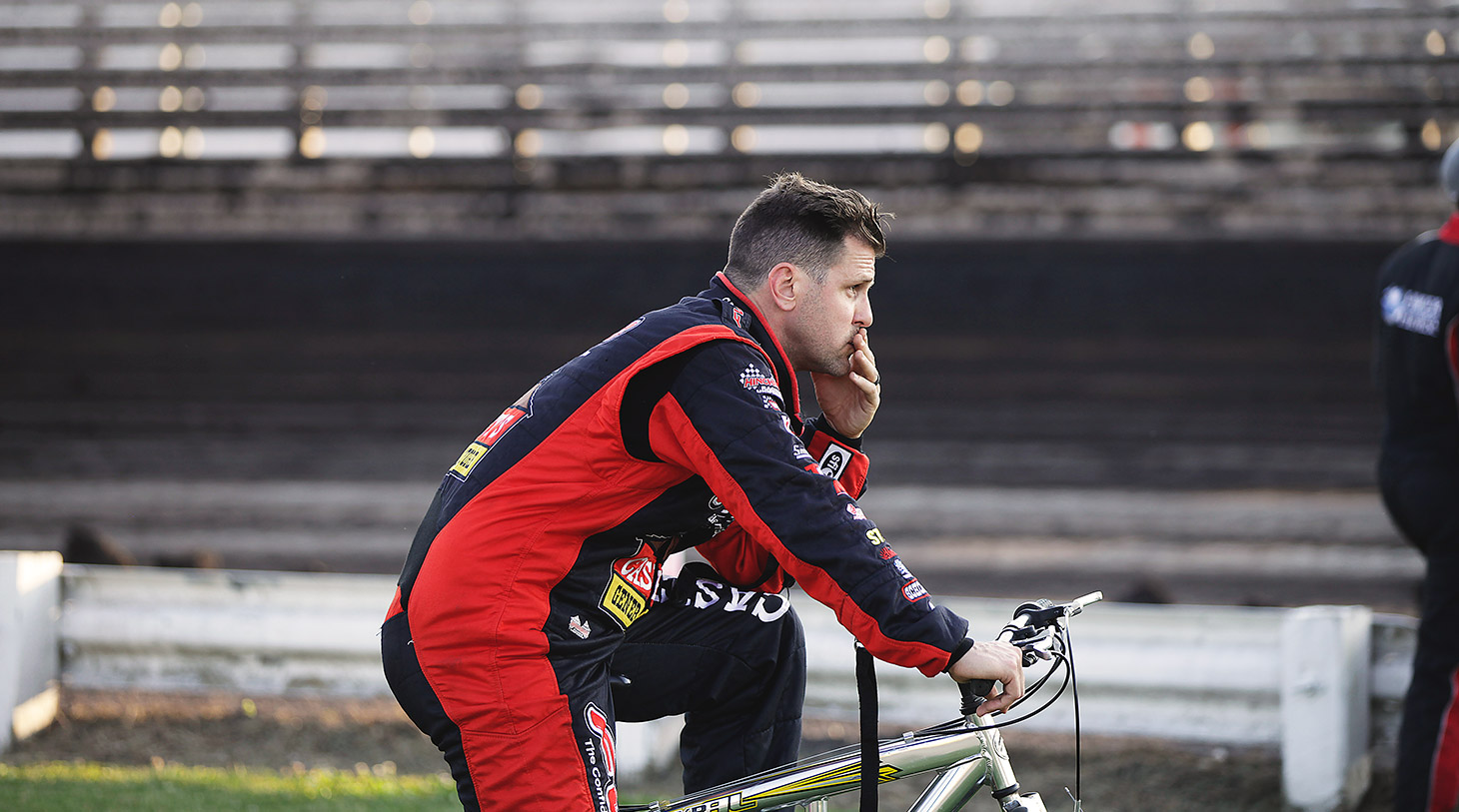 Too Much, Too Soon?

In 2002 we came off a really good year. I think come Knoxville Nationals time we had won four or five 360 races in a row and we were on our way to our first 360 championship at Knoxville. I was approached by Jack Housby at the Nationals and he said “Hey, would you be interested in driving the 6 car?” Of course you say yes. A high profile ride like that seemed almost too good to be true. One thing led to another and we kind of ended up getting into that deal.

I was 24 years old at the time and had been racing for three years. My thinking back then was, “Shoot, I’ve gone from racing locally to the Outlaws, I’ll be in NASCAR in two years.” Honestly, thinking back that probably was what my mindset was because everything happened so quick and had come pretty easy.

At the time I was working a full-time job doing doing F&I at a car dealership in New Springs, Missouri and making $125,000 a year. I had just bought a house and I just kind of left everything on a wing and a prayer knowing that no matter what happened I could always go back and do that type of thing for a living.

I felt like it was a pretty good deal. My uncle, Danny Lasoski, was going to help us with Mopar engines and Davey Whitworth was going to come along as my mechanic. I felt like with Don Lamberti, Casey’s and Lonnie Parsons it was going to be a great opportunity.

As a matter of fact it was a great opportunity. In 2003 our idea was just kind of like what I do today and we just kind of ran around the midwest. We won our first 410 race at Knoxville in May but it was one of those deals though where I’m not sure our finishes met up to my expectations.

At the end of that year their idea was that we’d go Outlaws racing. In my mind I was thinking, “Man, I’m not sure if I’m ready to go and do that,” but they wanted to go do it so I couldn’t really say no because obviously they’d go and get somebody else. That was actually when we hired Davey Whitworth.

Bump in the Road

We led off the season at Manzanita and we were leading the Outlaws show there when we rolled a left rear tire off the wheel and I broke my shoulder.

In hindsight I should have sat out two or three months to get myself healed. I came right back the next night and raced and really from that point on until mid-June when I got fired I could run about 10 really solid laps and then my arm would just go to sleep. I just didn’t have the feeling I needed to have and the results just weren’t there.

Racing is just like any other sport in that you don’t really want to be a baby and say that your shoulder is bothering you. I was shocking my shoulder to try and race through every night. We got to the point where I felt like we could be competitive. We went to Williams Grove and we were second quick and had a good run there. We went to Hagerstown and ran like sixth or seventh and then went to Grandview and ran 10th.

It’s very tough out on the Outlaws tour. You go out to each track and normally when you go to these places the track conditions aren’t ideal during hot laps. Sometimes you get a nice one but a lot of times it’s slimy. You go out there and run three laps in slime and then you’ve got to go back out there and run the two most important laps of your night at a place you’ve never seen.

There was times I thought to myself, “I’m in over my head here,” but at that point what do you do? It’s all about laps and more importantly making quality laps and then getting your confidence where it needs to be. We were used to winning 360 races at home so it was very hard for me mentally to come out here and run 15th and say to yourself, “Gosh, I can’t wait to come back here tomorrow and run 15th again or if I get lucky MAYBE a top 10.”

Back in that day it was hard enough going out and racing with the 10 best drivers in the world let alone going into a hotbed where you could easily add another 10 top local drivers. It’s like going to mow a yard for somebody and you really don’t know where every bump and every little divot is and you have somebody that’s mowed it for five or 10 years and they know where their blade’s going to dig in or what they have to do to mow it properly. That’s an analogy that really kind of sums it up but it’s very, very tough out there.

I kinda felt like we were going back in the right direction but like anything else, when someone with a better resume and more credentials becomes available a lot of times you’re going to be the odd man out. That was the situation I found myself in when Tim Shaffer was let go from the Beef Packers ride. The Casey’s team hired Tim and had to let me go.

I can remember it like it was yesterday. It’s funny how there’s certain things in your life where you know exactly where you were, what kind of day it was and every little detail about it. I think we had just run a race at Eldora on the weekend and gotten home late on a Sunday.

It was Monday morning and the phone rang at 10:30 and it was Lonnie Parsons. I looked down and saw his name on the phone and I just felt like something was different or wrong this time. He basically said, “Hey Brian we feel like you’re a great kid and you’re going to have a great future in this sport but there’s somebody out there that we feel like can get the job done today and for our team we need results today and we can’t really wait two more years.”

I remember just hanging up the phone and really you want to cry. You want to cry in one breath but you want to fight in the next breath and you know you’ve got to be a man about it and you’ve gotta go out there and do the right thing. I remember asking if I could come get my stuff and we made the three hour trip and they had all of my stuff sitting by the door.

My wife and I got in my pickup truck and drove to Des Moines and that was a long three hour drive and I had a lot of things going through my mind at that time. I was trying to figure out how to handle the situation. Should I go up there and cuss at them? Do I cry in front of them? Do I just go there and shake their hand and thank them for the opportunity and taking a chance on a kid that they didn’t have to take a chance on?

I chose the latter and chose to do the right thing and I feel like that was one of the biggest moments in my career because eventually everything came full circle. I shook Lonnie’s hand, I shook Davey’s hand and I shook Don Lamberti’s hand and we kind of went our separate ways. I stayed in touch with Don Lamberti; the President of Casey’s and the founder of Casey’s.

It’s hard enough to lose your ride but it’s hard when it’s not a guy you hate taking it. There’s not a soul in the pit area that doesn’t like Tim Shaffer. He’s a good friend of my family and with Danny and I grew up kind of around Tim. It’s hard, though. You don’t want him to do well. I don’t care what it is, you don’t even want them to win a heat race, you don’t want them to have quick time in hot laps. You want them to run bad, you want them to think, “Gosh, maybe Brian wasn’t the problem.”

Back on the Horse

On my way home I remember calling my grandpa and kind of asking him now what? You go from 360 driver to an Outlaws team and now you’re back and you’ve got nothing. It’s the first of July, there’s big races coming up and you’ve got nothing. My grandpa told me I had two options, I could go back and get a real job which didn’t sound very appealing or I could put the pieces back together and try to find something else to drive around here and prove that I can still drive a race car.

I hooked up with Tim and Gina Doogs out of Sedalia, Missouri along with Tim’s brother Terry and we really went on a tear. We kind of won everything in sight around home and then it came up to Nationals time. I asked them if I could come up with a 410 and some money for tires and other expenses could we run the Knoxville Nationals? They were a 360 team, they had the best of everything but they only had one of everything. We kind of turned that team into a really, really strong regional team.

I think looking back on things though I probably didn’t even really realize how lucky I was to even be in that opportunity. I just felt like that was my next transition. Looking back they shouldn’t have taken a chance on me. They should have hired somebody like Tim Shaffer from day one and built the team that way.

I’m glad they did take a chance on me, though, because really I firmly believe me getting hired like that and then turning around and getting fired was the best thing for me and getting fired was the best day of my life. The situation took me right back down to ground level and I knew right then and there if I ever was going to make it in this sport and make it long term I was going to have to have my own team. That was my goal from that point on. I decided I wasn’t going to carry my helmet bag from team to team and go track to track with a seat while looking over my shoulder every 5 seconds. I knew at that point I had to figure out a way to have my own team. It’s kind of funny how life works out.