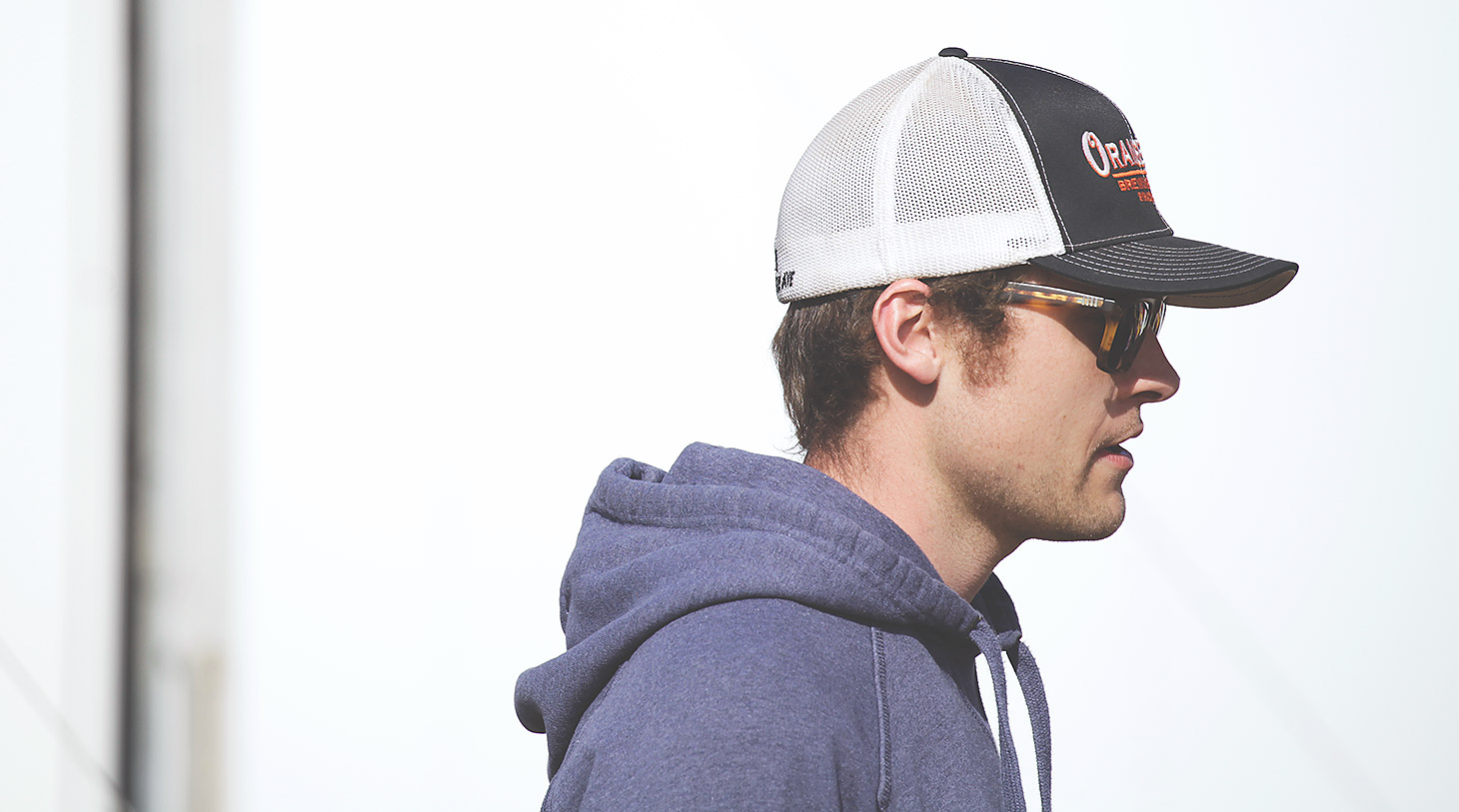 My first World of Outlaw win took place at Bloomington, Indiana in 2012. It was in early August, so it came at a great time because it was just before Knoxville. It was a great couple of weeks actually because we had a pretty successful Knoxville trip. It was quite a good time with the World of Outlaws.

Obviously any time you’re racing with the Outlaws it’s busy and that time of year is especially. There’s not much of a break and we had just come back from Canada and it’s a rush to get through the border. There are also a lot of races leading up to that busy time period.

I was with the Jim and Laura Allebach team in the No. 5W, which was the team I had travelled with pretty much exclusively over the years. Most of the time it was just my father Randy and I, so racing with the Outlaws was quite the effort.

Before we won we had been so close on multiple occasions. There was quite a few actually that we were in good position to win or it felt that way for sure. At the first Ironman 55 at Pevely, I got close. I slid Jason Meyers coming to the checkers going into turn three on the final lap and he was able to just sneak back by me unfortunately but that certainly would have been a good one to win.

Of course the importance of winning an Outlaws race is huge, especially when you are trying to win for the first time.

The race at Bloomington was particularly good for me, it was a track that I run really well at in the past. I had finished second the year before there and I’d always gotten around there good and was always competitive but things just never seemed to work out in terms of the format or circumstances.

We started the feature that night in seventh and we were just really good. We started working through the field and we were able to pass some cars. I was noticing that not only was I passing cars but I was passing a lot of the really good cars.

Joey Saldana was out front leading and we started to get into lapped traffic. He was struggling in traffic and I was actually getting better and better. It was the perfect situation. I was able to get to Joey, pass him and lead the final 22 laps to pick up the win.

It was one of those nights where you just have to be really careful, because I knew we were really good and you don’t want to mess it up and make sure you take advantage of the situation which is really hard to do. Having cars that were that good in the past and being in that situation had given me experience which was great as the race was winding down.

It’s always a tricky thing when you’re trying to figure out if you have a car that’s capable of winning. I knew I was passing cars but on a bullring track you’re always around cars, so you don’t necessarily know exactly where you stack up.

I was pretty sure Joey was up leading but he was in open track while I was still around some cars but I was still gaining on him, so I knew I was really good. It was just one of those nights where I really couldn’t do anything wrong. I could run anywhere on the track and do whatever it took to handle the opposition in front of me. It really was amazing how that night everything just went right. We were really good and everything worked out and it certainly felt great to finally finish it off.

It’s brutal trying to close out a World of Outlaws feature, especially with the competition. It’s insane really, how good all of the guys are at all of the tracks you go to. There are so many good drivers, good teams, good crew chiefs and great car owners. It’s such a grind when you’re out there trying to do it full-time. At times it’s absolutely impossible to dig yourself out of the hole that you find yourself in inevitably for whatever reason.

Double-file restarts have added a lot of difficulty to it as well. It seems like even when you do get into the lead you are never really safe. At the small tracks it’s especially difficult because there’s never really a time where you get a comfortable margin that lets you feel safe. It seems like the next corner always brings more traffic.

At the same time a lot of those races are the ones that feel like they are the most fun because it seems like there’s always something to gain and you always have something to motivate you to push forward.

Winning that race was everything. I’d been trying to do it for years. Of course any sprint car race is difficult to win, as competitive as it is everywhere, but trying to win with the Outlaws is truly a whole different level. It’s not comparable to anything else you can do and especially when you’re racing at the full-time level with the same guys every week. It was such a great experience and hopefully I’ll be able to do it again. That was truly the culmination of years of effort really.

I think everyone wishes it would happen sooner or more frequently and hopefully more wins will come in due time. As a team, I got to do it with essentially family members as car owners who I’m very close to and had been with for a very long time.

I also really appreciate that my father and I were able to win it together. Winning an Outlaws race was something that he’d never been able to accomplish as a driver. He was close multiple times so it was important for all of us. That year was the last year that we travelled full-time with the World of Outlaws, so I’m very thankful that we we were able to finally get that win.